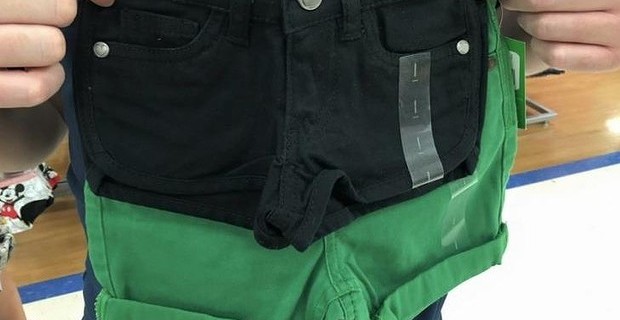 While shopping for clothes for her one-year-old daughter at her local Big W store in the Queensland town of Emerald, Nikita Friedman noticed a massive discrepancy in the length of boys vs girls shorts.

Nikita snapped a photograph of the difference between the girls vs boys size one shorts and uploaded it to social media. She accused Big W of ‘sexualising’ kids’ fashion and described the shorts as “inappropriate.” Here is a full shot of the shorts: 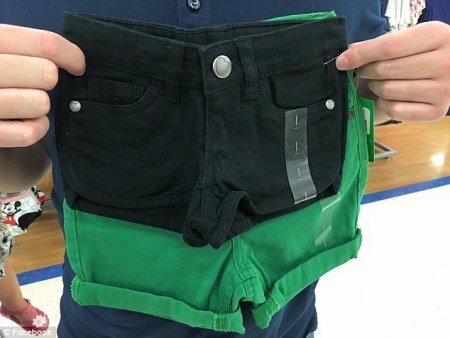 Here is what Nikita posted to the Big W Facebook page: 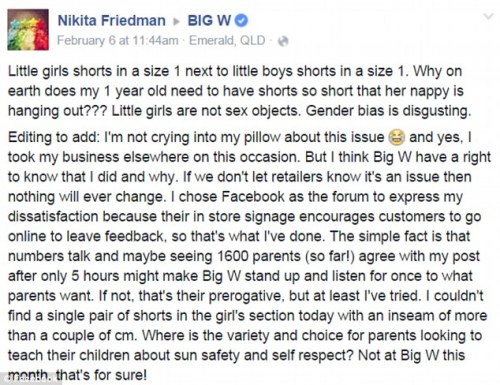 Nikita’s post went viral almost immediately, drawing 4.7 thousand comments and over 60,000 likes in five days.  Big W publicly responded to Nikita’s post, saying that they would address the issue with the buying team and how they value customer feedback, blah blah.

There’s no doubt there’s a difference in length between these two pairs of shorts and yes, I think a longer style option in the girls department or a non-gendered clothing area should be available – BUT – and at risk of being publicly crucified here, isn’t there a bit of a difference in the styling of boys and girls clothes anyway?

I’m not saying that only girls should wear short shorts and only boys should wear longer styles, but what I am saying is that in general, clothes are cut differently between the sexes. Take a t-shirt for example – a standard ‘girls’ t-shirt tends to be a slimmer cut than a ‘boys’ t-shirt, that is more of a straight cut. The sleeves are different and often, so is the length. That’s not to say that a girl can’t wear a top from the boys’ section and vice versa, but generally speaking, that’s what the demand is.

I think Nikita was well within her rights as a parent to have (and view) her opinion on Big W’s clothing. The thing I take issue with in Nikita’s post is where she says, “Where is the variety and choice for parents looking to teach their children about sun safety and self respect? Not at Big W this month, that’s for sure!”

My daughter loves her denim shorts – they keep everything concealed, but they’re quite short. They’re comfy enough to run around and play cricket in and above all, she feels good in them. They’re her faves. According to Nikita, by allowing my girl to wear her short denim shorts, I’ve failed to teach her self-respect. And sun safety. Both of which are untrue.

The idea of a short pair of shorts making a child into a “sex object”  just doesn’t sit right with me.  I dare say that to anyone sick enough to look at a child through those eyes, whether or not they were wearing short shorts or not would be irrelevant.

It’s not clear whether Nikita tried those shorts on her daughter and her nappy WAS hanging out, or if she just eye-balled them and assumed it would, but in either case, I think the decision she made was the right one. Go to another store. I get for some parents this can be frustrating, but at the end of the day if you don’t like it, don’t support it. If the general consensus over a clothing item is that it is inappropriate, then sales won’t do well and the buyers will get the idea. By all means, express your thoughts but just be mindful you’re not putting other parents down in the process.

In short, YES I think gender-neutral options should be available in more kids stores. I think longer AND shorter styles should be available to both little girls and boys however, I also think that there’s nothing wrong with having different cuts and styles of clothes that are gender-specific. As consumers, we vote with our shopping dollar so if it’s not to your taste, I say move it along and support the store that best reflects what suits you and your child. Easy peasy.

What are your thoughts on this issue?