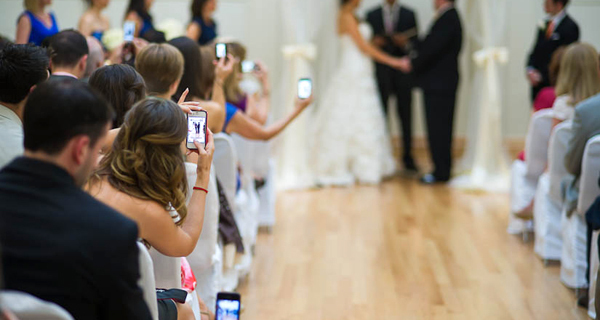 Should wedding guests be banned from taking photos?

A very unhappy photographer has called for all bride and grooms to ban their guests from taking photos.

Thomas Stewart, from NSW, says trigger-happy guests are ‘ruining official photographs’. Along with his rant he posted a picture from a recent wedding where the groom couldn’t even see his bride walking down the aisle. This is the photo: 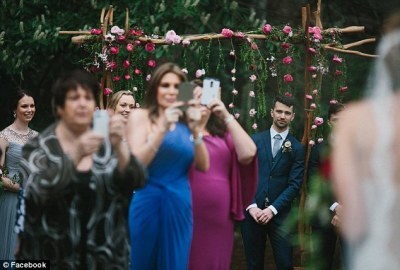 ‘Look at this photo. This groom had to lean out past the aisle just to see his bride approaching. Why? Because guests with their phones were in the aisle and in his way,’ Mr Stewart fumed. He continued:  ‘They didn’t invite you along to take photographs that they probably won’t really look at anyway. You are witnesses to their marriage, so for goodness sake, watch them with your eyes and your minds, not your phones.’

He then suggested that couples who are throwing a wedding do things to ensure a photography ban such as write it on a chalkboard or have the celebrant announce it at the start of the ceremony.

Many people obviously agree with the rate photographer, with more than 25,000 people sharing it on Facebook.

Usually I am all for people having the right to do whatever they want to do and lately find myself rolling my eyes at everyone being outraged at everything. But I have to say, in this instance , I am inclined to agree with him.

I went to a wedding in Byron Bay recently where guests were asked not to take photos during the ceremony and I think it made the ceremony that little bit more special. Everyone was entirely focused on the bride and groom  and not looking at their phone to see what instagram-worthy photos they just took. Does this make me sound old and grumpy?

Another, entirely different reason, I think banning phones during a ceremony is a good idea is because often at weddings, guests are quick to upload photos of the bride and groom on social media. Many people may think this is fine, but I am all for waiting for the couple themselves to post a photo on social media first. In the same way I think parents should be the first ones to upload a photo of their newborn. It’s their day and they have put so much time and effort into it, surely they should be granted this etiquette?

What do you think? Should guests be banned from taking photos during a wedding ceremony?