My daughters will not be going to a Chris Brown concert

If my young daughters ask me if they could go to a Chris Brown concert I would definitely say no. He is not a person to be idolised by anyone and I do not want my children looking up to some-one who thinks it’s okay to beat a woman. I will NEVER forget Rihanna’s beaten face after his assault on her and I will not support anyone who thinks it’s ok to do this to another human being.

If that means that means putting my foot down and saying no to a concert my daughters want to go to  – so be it. Tickets to Chris’ Australian tour in December cost between $200-$500. Let’s not give money to a man who clearly does not respect women.

Domestic violence has been making headlines in Australia recently and with good reason. We as a country have reached a crisis point with one woman being killed each week.

Chris Brown was recently issued a notice by the Australian government informing him that he is not allowed to enter the country for his concert tour because of the 2009 assault on his then-girlfriend Rihanna.

Getup! have now done a massive backtrack and come out saying they made a mistake to campaign against Chris Brown’s entry into Australia.

The activist group issued a statement saying, “We now understand the campaign also supported a racist narrative that sees men of colour unfairly targeted, and stereotyped as more violent than their white counterparts.” 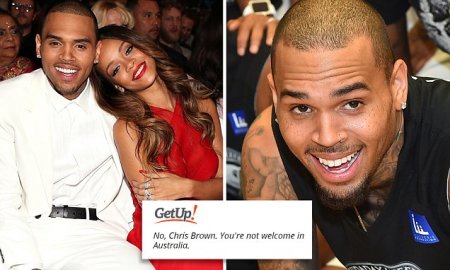 According to a police affidavit of the 2009 assault on Rihanna, Chris Brown pulled his car over and tried to push Rihanna out, but she was still wearing her seatbelt, he then pushed Rihanna’s head against the window, punched her with his right hand, and then continued driving while hitting her and also biting her on the ear.

His blows caused her mouth to fill with blood. He also tried to choke Rihanna after she took the keys to his car away. The detective also notes in his affidavit that Rihanna nearly lost consciousness.

He then got a tattoo on his neck that looked remarkably like Rihanna’s beaten up face. 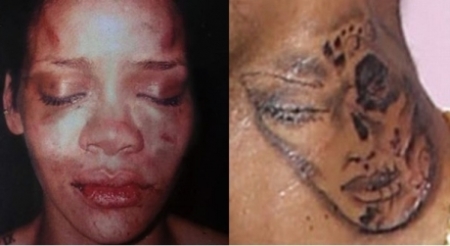 Chris has also pushed ahead in his campaign to be allowed into Australia sending a series of tweets on the issue including; “I would be more than grateful to come to Australia to raise awareness about domestic violence. I’m not the pink elephant in the room anymore,” and “my life mistakes should be a wake up call for everyone.”

However Chris’ remorse for beating Rihanna seemed a little less authentic when he told individual fans who tweeted their support that he was was still coming to Australia and “it’s media and all bullshit”.

I think the issue is not that Chris Brown is a man of colour but that he beat his girlfriend and was convicted of this crime. He is idolised by millions of young people around the world and he has shown little remorse as a perpetrator of domestic violence until it seemed to be hurting his career.

Instead of tip-toeing around race we should be calling out all men, and all women for that matter, that commit acts of domestic violence, regardless of skin colour, social status, wealth or celebrity.

Do you think Chris Brown should be allowed to perform in Australia?