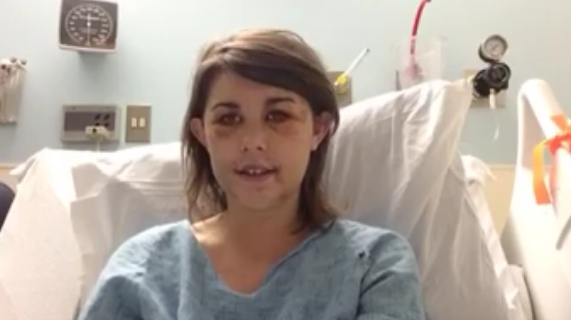 This beautiful brave woman, Darrian Amaker, was beaten by her boyfriend for ten hours knowing his intention was to kill her. She survived the horrific attacks and ended up spending four days in hospital with her eyes swollen shut. She sang this incredible haunting song from her hospital bed in a effort to raise awareness for domestic violence. It is a song about a woman leaving her abuser.

Her video has gone viral but perhaps her written words below are even more powerful than the song itself.  A message that offers the glimmer of hope and triumph that we can all support and share.

“A few days after thanksgiving this past year, my Love went straight psychotic and beat me brutally for ten hours. He planned it out; I was supposed to die. I survived or escaped, whatever you want to call it, and spent four days in the hospital, eyes swollen shit, wondering why, wondering why.

I am physically safe now; my Love-no-longer has been formally charged by a grand jury with six felonies and faces many years as a prisoner.

I asked my doctor why I look different in the mirror, assuming it’s a psychological consequence of savagery. Softly she remarked that all of my bones are bruised, quarter-inch ridges that I can feel – my face is different, it’s one-half inch wider now.

I have spent my life thus far collecting human stories: I am a singer, a photographer, a writer. I make things. I give things away. For the first time I have brushed up against an inhuman story and am deeply shaken.

I don’t generally record videos of myself but it was the only thing I wanted to do in the hospital. I insisted – it felt important and a small triumph to make something, salvage anything from my shipwrecked heart.

Domestic violence is not a faraway issue. It affects people you know, cheerful people, people who sing, people who love. We the humans must be better, kinder, stronger. We the loving must not tolerate abuse. We the living must facilitate life.”