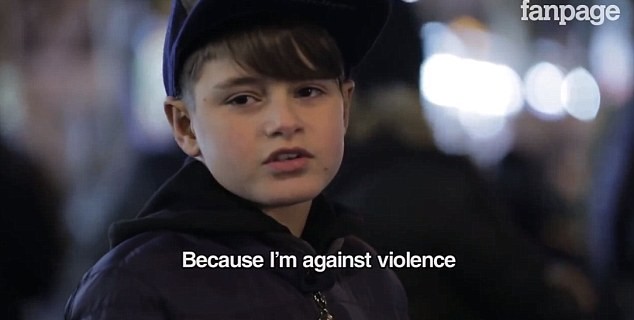 We are divided at Show + Tell over this video. Is it wrong or powerful?

A new video has taken the web by storm, it is one that highlights the serious problem of domestic violence. However, here at Show and Tell, we’re torn over whether the video is appropriate or not.

The video was made by an Italian video journalist called Luca Lavarone. It was produced as a social experiment using children, with the aim of highlighting and reducing domestic violence.

There are several young boys in the three-minute video, ranging from six to eleven years old. Each of the boys are introduced to a girl and asked to caress her, pay her a compliment, pull a funny face at her and finally, they are told to slap her.

The boys happily act out each of the tasks until the final request to slap the girl. All the boys are clearly shocked and upset by the request and refuse to hit the girl. Their reasoning behind their refusals is adorable, emotional and powerful.

One of the eldest boys tells the interviewer: “As the saying goes: Girls shouldn’t be hit, not even with a flower.”

Another replies: “I’m against violence.”

The clip ends with one of the boys staring down the camera and saying: “Why? Because I’m a man!”

Finally, a slogan then appears on the screen that reads: “In the kids’ world, women don’t get hit.”

The video does indeed have a powerful message to send about violence against women, making it clear that even these little boys understand that violence is wrong.

But does it hit the point entirely?

We are unsure whether the use of children for a campaign like this is really appropriate.

Monty thinks that videos like this shock us, make us think, highlight problems and confront us. Sometimes having children in videos like this can make us so uncomfortable that the message sinks in even more.

Brooke and Stacey disagree and think that this video is aiming the message at the wrong audience–that putting children in these situations is unhealthy and also unfair. Also, that involving children in videos like this should be about stamping out violence against anyone, not just women.

We are not the only ones with varying opinions, it seems people either totally agree or disagree with this video.

Whatever your opinion on this video, the bottom line is, we’re talking about it, and in our discussions we are mentioning domestic violence; this could spark conversations that need to take place in order to make changes occur.

What do you think, was this video a hit or a miss?