The times Google told me I was dying…Oh my god, am I?

This post is sponsored by Healthdirect Australia but is 100% my personal story.

We’ve all done it right? Had an ache or a pain and then reached for your phone and googled the symptoms?  I have done this more times than I like to admit. I tend to self diagnose (on a regular basis) and then to back up my totally ‘rational thoughts’…I Dr Google it. Without fail the doc backs me up and confirms that I am in fact on the brink of death. Knew it! Sure the information often comes from some random site somewhere else in the world but that isn’t the point! Confirmation of approaching death is confirmed one way or another.

I’ve been told I’m a bit of a hypochondriac (I call rubbish to that), I just loathe going to the doctors unnecessarily so much, that I have taken matters into my own hands. Due to my impatience and occasional over dramatising (‘occasionally’ being the operative word) I have fallen victim to Dr Google on many occasions. My husband’s patience for me ‘nearly’ dying every second week is running thin. I have had to go cold turkey on my good old reliable web. It was either the doc or my husband, the decision wasn’t an easy one. 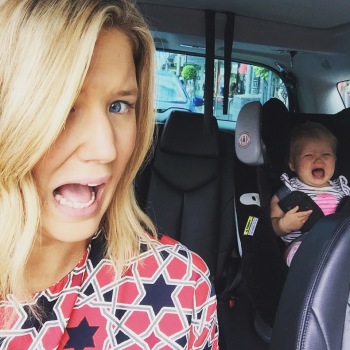 My Edie bug and I were not happy to be told by Dr google that my arm was about to fall off.

There have been a few times in my life that I actually didn’t in fact think I was dying, but Dr Google told me otherwise so the panic stations went into full force.  Below are some of the most ridiculous dramatic diagnoses that the web told me. The response was even too dramatic for me.

That time I fainted at work…I never faint so it was very unusual. I’d been running on empty, not making time for lunch and I was totally sleep deprived due to my needy offspring, so I kind of put it down to that. So, after I left work (I soldiered on like a hero mind you) I went home and asked my trusty friend what he thought it could be. I just wanted a bit of reassurance that it was due to lack of food or exhaustion. That was far from what my eyeballs read. Best-case scenario was a brain aneurysm/stroke and brain cancer. WHAT? Way to freak a girl out. After I ate some sugar I felt fine, and…then ignored the web’s diagnosis. Dramatic doc.

That time I had a tummy ache… I returned from a self indulgent solo holiday to Bali and felt sick in the tum. I was super nauseous and had zero appetite. I told a few people of my tummy troubles and heard some serious horror stories, so I did what any smart person would do, I jumped on my laptop and was diagnosed…with having a giant worm. As soon as I read that, I could totally feel it moving in my stomach. Turns out it was just a bit of Bali belly. Not even a bad case. Side note: Don’t google parasite worms.

That time my ear was crackling…My ear was driving me crackers one day. Every time I would chew or open my mouth wider than usual one of my ears made a crackling noise. It was loud and unsettling but I was busy and I am allergic to actual 3D doctors so I naturally googled my symptoms.  I was sadly informed that I was on the path to becoming deaf in that ear. The crackling was an early sign of my hearing fading and before I knew it I would be in permanent silence. I slept on that diagnosis and woke up the next day with a perfectly crackle free ear. Turns out it was just a bit of water in the ear that made it’s way out.

As I share these stories with you (the list is way longer than these three) , I realise how ludicrous it is, but hold judgement, I bet your fingers have done some Google walking too?

From now on when I feel an ache or pain I will still naturally reach for my phone BUT I will check the healthdirect app instead. It has a symptom checker (phew) but also allows you to search for trusted health information and find a local health service. There is no other Australian app that offers this unique and comprehensive combination of tools.  You can also check your symptoms by clicking here.

* Click on the links for more information about the healthdirect app or to download the app on Apple or Android.