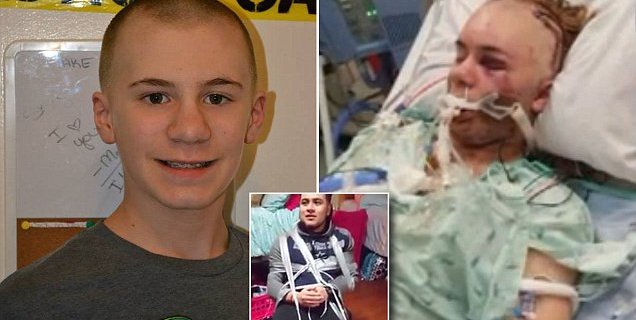 Another idiotic trend has hit the Internet and like many others before it, has left a teenager narrowly escaping death.

The ‘Duct Tape’ challenge involves a person being wrapped in duct tape and then attempting to break free while being timed. Kids are filming their attempts at the challenge and posting them on YouTube.

Not so hilarious is the story of 14-year-old Skylar Fish, who ended up in hospital with 48 staples in his head after suffering a brain aneurysm. On January 16, Skylar was filmed being wrapped up by friends and while trying to struggle out of the tape, fell and hit his head on a metal window frame before landing on the concrete below.

Skylar’s injuries are serious. His hair was ripped out and his eye socket and cheekbone were crushed, which may very likely leave him with no vision in his left eye.  There’s not much that Skylar actually remembers about the fall, but he told Kiro 7 News, “I’m just, actually, really lucky to be alive.”

I’m not sure how we can highlight the outright stupidity and impending danger of these challenges to our kids. It seems they think they’re invincible; in their minds this stuff happens to other people, not to them.

There’s been the ‘Cinnamon Challenge’, which involved ingesting a teaspoon of cinnamon in under 60 seconds. A four-year-old boy from Kentucky died when the powder made its way into his lungs and ultimately suffocated him.

There was the ‘Neknomination’ challenge, which involved sculling a pint of alcohol without taking a breath.  20-year-old Bradley Eames was found dead four days after doing the challenge, where he consumed two pints of gin mixed with tea bags in a matter of minutes.

There was the ‘Planking’ craze, where people posted pictures of themselves lying flat with their arms and legs by their side, often putting themselves in dangerous situations. 20-year-old Australian man Acton Beale died after falling from a Brisbane balcony attempting a plank.

Being with our kids 24/7 is not only unreasonable, but virtually impossible, however these challenges are bloody frightening.  The only thing that we can do is show our kids the dangers these challenges pose, share Skylar’s story and hope that scary but very real stories like this remain in the backs of their mind when they need it most.