I’ll admit it, I like a bit of a sexy novel.  I know. Total saucy minx.

Annnyyyway, 50 Shades is apparently set to be outdone by the newest naughty kid on the block, a novel called Maestra by Lisa Hilton – and it’s meant to make 50 Shades look like a very tame Mills and Boon. 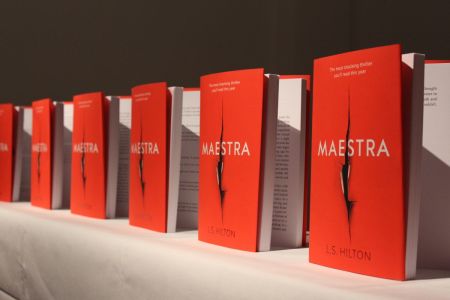 Maestra is described as a crime thriller that follows the sexual exploits of its main character, Judith Rashleigh, between the worlds of the London art scene and the European playboy scene.  Aiming for authenticity, Lisa researched her anti-heroine character Judith by attending an upmarket sex party in Paris which she described as “discreet” and “rather elegant.”

The character of Judith is always up for some adventurous exploits at sex parties and isn’t interested in dating or relationships. She just loves sex and makes no apologies for it.  “My sex scenes are not disguised as anything. Rashleigh likes sex. She enjoys it,” says Lisa, “She likes having it on her own terms and in her own way.”

Get your hands on Maestra when it goes on sale on March 10.