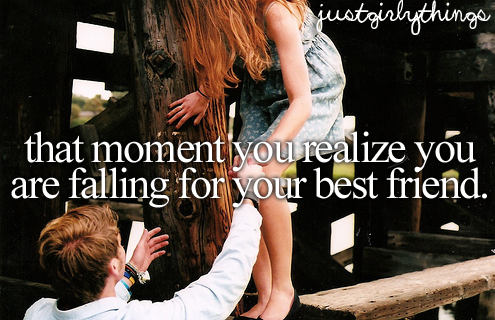 The Friend Zone – it’s kinda like the Danger Zone, but sadly without the awesome Kenny Loggins guitar riffs.

I’m lucky enough to have a bunch of awesome male friends where we happily hang out without the thought or expectation of anything more.

So despite every romantic comedy telling us the complete opposite, we’re living proof that it IS possible for a man and woman to just be friends.

But what they do get right is the major level of suckage when your stupid subconscious gets all the feels about one of those friends who just doesn’t see you in that way. 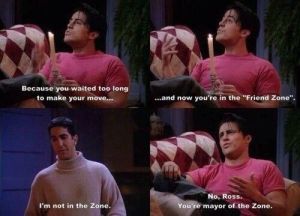 And now you’re in the Friend Zone. Hell, if they’re a long-time friend, you’re Mayor of the Zone. Thanks for that, Joey Tribbiani.

I’m not talking about the zone you get yourself into by befriending someone with the sole intent of cranking up the sexy. You can’t then bitch and moan about being zoned If you tried to beat the system, because um mah!!

I’m talking about the truly platonic, no games, no agenda friendship where you chill and chat until BAM!! One of you decides they want something more and the other is left being all awkward, usually saying something like “awww I’m flattered!! You really are such a great girl/guy, you deserve the best” and you feel like someone just pulled your heart out via your toes. Because what they really mean is “yeah, but nah, but thanks?”

That shit is brutal.

And I get it. You can’t help who you’re attracted to and whilst it’s entirely shit and unfair, we’re expected to listen to the wise words of Janet Jackson and accept That’s the Way Love Goes.

But what would her ridiculously well-defined abs know about unrequited feelings for someone? When a mate who knows you better than anyone decides He’s Just Not That Into You, it usually ends in you feeling like a fugly toad. Because you’re supposed to attract someone by ‘being yourself’, right? 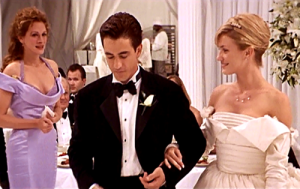 In “My Best Friend’s Wedding”, Julia Roberts tries to justify her claim on friend Dermot Mulroney by the Jell-O level of their comfort and compatibility compared to the ‘irritatingly perfect’ Crème Brule on offer in the shape of Cameron Diaz.

We like to think that’s how it should work when we’re the Jell-O, but the truth is you never order the desert you know is good for you. You want the exciting, fresh, once-in-a-lifetime treat.

Watching Jacinda’s tearful exit on The Bachelor last week as she playfully punched Sam on the arm with an emotional “I’ve got enough friends” was a little too familiar. The exquisite misery of it all – simultaneously not wanting anything to happen for fear of ruining the friendship whilst desperately hoping SOMETHING will happen to change the friendship. 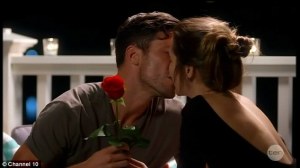 Yet somehow, chicks like sarcastic, cool girl Heather get away with calling Sam “dude” and banging on about superheroes and still get a pash! Girl got GAME.

Everyone says any good relationship starts in friendship, but how the hell are you supposed to be friends first without the risk of being zoned forever?

And is there a scientific formula to transform your Jell-O-self into Crème Brule so you don’t end up a bridesmaid in Mr Wonderful’s wedding to someone else?

If you are stuck in the zone, have a listen to this Aussie made song and feel better knowing you’re not alone.

Have you ever been caught in the Friend Zone?