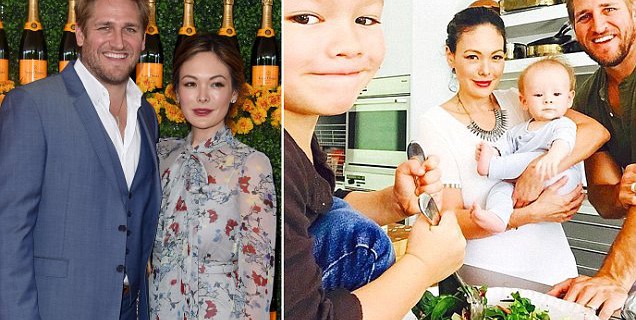 Celebrity Chef Curtis Stone has offered some advice to parents whose children refuse to eat vegetables saying parents should ‘let fussy children go hungry instead of pandering to picky eaters.’

He said, ‘too many parents worry about their kids being hungry that they let their children dictate what they eat.’

Curtis has previously spoken about how he won’t let his children eat junk food, such as hot dogs because they’re full of ‘s**t.’ “Your kid is going to embrace whatever you expose them to, right, that’s just a fact of life. People tell you, ‘no, no my kid likes this or my kid likes that.’ My opinion is; that’s just not accurate.'”

It’s no secret that feeding your kids is one of the hardest and most annoying parts of being a parent, at least it is for me. Honestly, I think Curtis is the bees knees if he can pull this off with his two kids, Hudson, 4, and Emerson, 1. My 4-year-old is a right royal pain in the ass when it comes to eating. He is so bland and so fussy that he often has very little variety. I have done exactly what Curtis has said before, on many occasions and it ain’t pretty.

We have rules around dinner time and yes, of course I try to get my kids to eat veggies…and most nights they will but it doesn’t happen without a bribe. And that bribe is chocolate, or ice cream or a lollie. I’m fully aware I’m cancelling out the goodness of the vegetable he just ate, but it’s better than no tucker at all right?

I grew up with parents who had the same philosophy as Curtis and still to this day, I can’t eat the foods they forced me to eat. I don’t believe in giving your kids separate meals…but I do believe in cooking them what they like and what you know they will eat.

Call me crazy but I think I’ve got the hang of it now (just don’t tell anyone that our primary source of food in my house is noodles and butter).

What’s the philosophy (or means for survival) around meal times in your house?