See how the celebs reacted to America’s gay marriage news

America has marked a HUGE milestone today by finally legalizing gay marriage across it’s entire nation. A Supreme Court ruling means that all 50 American states must not only recognise all same sex marriages, but also allow them to occur. The day is momentous for everyone who believes in gay marriage, and all the celebs have something to say about the changes…

‘BREAKING: #SCOTUS has just announced that love is equal across the nation!!!’- Ricky Martin

‘How far we’ve come since the Pres Obama & Sen. Clinton ran against gay marriage in 2008! People can change. Never give up’- Michael Moore

‘Today is a big step in our march toward equality. Gay and lesbian couples now have the right to marry, just like anyone else. #LoveWins’- Barack Obama

‘Proud to celebrate a historic victory for marriage equality—& the courage & determination of LGBT Americans who made it possible.’- Hillary Clinton

‘It’s a new day. Thank you Supreme Court. Thank you Justice Kennedy. Your opinion is profound, in more ways than you may know.’- Neil Patrick Harris

‘Congratulations America for finally catching up to the modern era with this landmark step forward for gay and lesbian rights.’- Seth MacFarlane

‘A giant step towards our country being a better place to be!’- Shonda Rhimes 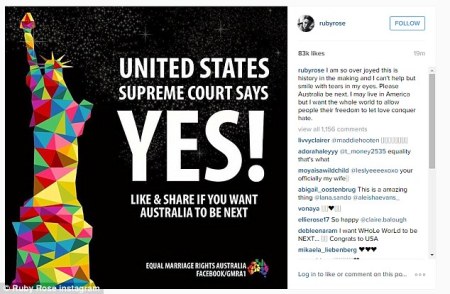 Ruby Rose has also used the occasion to call upon Australian politicians and MP’s to make the historic legislative change, posting on her instagram account; ‘I am so over joyed this is history in the making and I can’t help but smile with tears in my eyes. Please Australia be next. I may live in America but I want the whole world to allow people their freedom to let love conquer hate.’