One of my favourite people passed away the other day

The other day my beautiful Pa passed away. He was one of my all time favourite people. He and my nan played a big role in my upbringing and he was always there when I needed him.

My Nan passed away about 2.5 years ago and she was not only a kick ass Nan, but she was also someone I considered a great friend. Together, in my eyes, and also many other peoples eyes…they were perfect. We used to say they were like the real life Notebook. 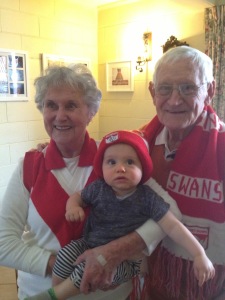 My beautiful Nan, Pa and my son Bax.

Over the past 5-6 years my Pa’s memory started to fail him and by the time he passed away he was a shadow of the man he once was. He struggled to find words and recognise faces, but he still had this magical twinkle in his eye and would give you a massive smile, even though he didn’t necessarily know who you were.

Because Pa slowly slipped away over the past few years, a part of me was relieved when he closed his eyes for the last time. My heart was broken, because I would never get to see this incredible man again, but I also take so much comfort in thinking that he and my nan are back together.

My Pa was a champion footballer when he was younger. He played for South Melbourne (who are now the Sydney Swans). He played in one of the roughest games ever played in AFL which is famously known as the ‘blood bath’, he won three best and fairest and played for Victoria 7 times. In the footy world my Pa was a champion. Outside of the footy world, he was an even bigger one.

Growing up I always worried about my Pa dying. For as long as I can remember I took mental notes on what I would say at his funeral. I know this sounds odd but I think because I loved him so much, it made me fear his death so much too. The other day at Pa’s funeral, I had an out of body experience while doing the eulogy for this man that I loved so much.

Here are the words I said at his funeral-

It’s so hard to stand here and try and capture my Pa’s life in a few minutes.

What I can do though, is tell you that I’m one of the luckiest granddaughters in the world, because I got Billy Williams as my Pa.

If you think he was a champion footballer, times that by about a thousand and that is how great he was at being our pa.

I like remembering funny little things about Pa, like how he used to eat a lemon like it was an apple, skin and all, how he would shammy the water off his car after he had driven it in the rain, how he loved shows like Deal or No deal and Home and Away.

I also like remembering how safe he always made me feel, how I got so much comfort watching him read the paper in his chair or potter away in the garden and how his whistling around the house would always put you in a good mood.

My Pa along with my nan played a huge role in our upbringing. Pa would often pick us up from school, drive us to netball practice and games, drive us here there and everywhere at any request we ever made and there were loads of them.

He was often my accomplice in wagging school too. I’d call him during lunch time or a class I did not want to be in and ask him to come and pick me up. Every time he would arrive at my school, he quickly saw that he was about to be the taxi for all of my mates wanting to skip class too. When we wanted to wag on Tuesday and Thursdays though, we had to rely on someone else to pick us up though cause because Pa would be playing golf. That is when My Aunty Noelle would get the call up.

Pa was so reliable, he was loyal and hilarious and extremely generous and so loving. In my 35 years of having Pa, he never once raised his voice at me, or anyone for that matter. He had this beautiful way about him that made everyone want to be around him. We would go down the street in Williamstown, a trip that would normally take someone 5-10 minutes would end up being an hour or two for Pa, because every second step he would take, he would bump into someone he knew. Everyone always wanted to chat to Pa and he always had time for everyone.

Some of my favourite memories include my Nan and pa, like our yearly trips to Queensland and lining up for the theme parks before they had even opened and being the last ones to leave. Sitting in their backyard chatting and eating toasted sandwiches, and seeing my grandparents hold hands wherever they went, and steal kisses from each other when they thought no one was looking.

I only hope that in 60 years time the father of my children still looks at me the way my Pa always looked at my nan.

They were a real life love story and although my heart is a little broken, I truly think that Nan and Pa are back together somewhere sipping on cask wine and eating pretzels.