Entertainment, News, What's On Our Mind

“To every little girl who dreams big. Yes, you can be anything you want—even president.”

Hillary Clinton made history on Tuesday when she became the first female presidental nominee of a major political party. The first in 228 years and 44 elected presidents of the United States.

Hillary celebrated the moment with a speech celebrating the historic nature of her win, and jokingly promising not to smash the glass ceiling she and her supporters were standing under. Whether you support Hillary politically or not, this is an important moment in female political history. A moment little girls can look up to and say I have a chance to be the president of the United States or anything I set my mind to. 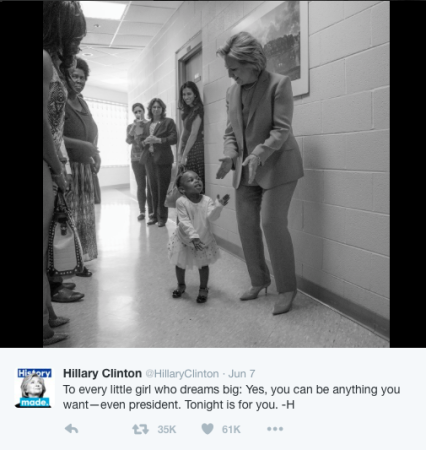 When Julia Gillard became the prime minister of Australia I watched the announcement in tears. I knew I was watching history be made, because as a little girl my mother had told me, that if I was lucky, I might one day see a woman lead our country.  When I was growing up that seemed so far from possible. I was surprised at how emotional I felt that my two daughters would grow up in a world where a woman had already been prime minister of our country. Hopefully, as they grow this becomes more of the norm, not just a one-off.

Women all around the world and hopefully men as well are feeling emotional and proud at witnessing this landmark moment in their lifetime.

In Hillary’s speech she talked about her mother being born on the day that Congress passed the 19th Amendment, giving women the right to vote, “when a small but determined group of women and men came together with the idea that women deserved equal rights.” Like what Hillary has shown little girls in America and the entire world, that gender is not a barrier that can limit what they want to achieve. It isn’t an easy ride and we have a long way to go but this is a very exciting step.

You can watch some of Hillary’s history making speech below: