This is how I tackled the death chat with my son

There was a death in our family the other day. This death led to a lie. The lie made me question my parenting. Allow me to explain.

For Christmas last year my mum gave my son some goldfish. He looked at them for about five seconds and then lost interest. Fair enough, goldfish are bat shit boring.

I have avoided having pets like the plague for the last 15 years because the bottom line is, I kill them. It ends in tears for everyone involved so it’s best anything covered in hair or with gills or claws just keep their distance.

Mum lost the memo. Of course the fish became my responsibility and once again the story ended in tears.

The other week while cleaning the fish bowl, which may I add is a seriously rotten job, I noticed the white fish was playing sleepy lions. This thing was dead, like super dead, eyes wide open with no mini fish soul in sight. You may notice how attached we were to these fish by their names. There was a white and an orange fish and that is what they were referred to as, if at all. 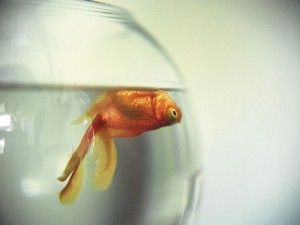 The fish looked similar to this… just white.

Anyway, white fish kicked the bucket. When I saw it floating lifeless with orange fish circling around (and most probably crying for 3 seconds before forgetting why it was upset to start with), I panicked. Death chat on the horizon.

Even though my son Bax had little to no interest in the fish, he most certainly knew there was two of them. In time, his inquisitive little four year old eyes would spot the orange friendless fish and inquire.

I decided the best thing to do with the white fish was to flush it. It felt brutal and wrong as I heard it flop into the bowl that is used for human waste. I pushed the half flush button and watched the little guy go down the gurgle. I felt a pang of sadness for .2 of a second and then went on with my day.

About two weeks later my baby daddy came to me and asked if I’d realised there was only one fish in the bowl. The day had arrived. Our son had noticed the white one was a goner. I quickly informed my partner that the fish had indeed passed and was somewhere between Hawaii and Bangladesh by now. He looked at me like I was a cold hearted bitch, which I deserved, because when it comes to goldfish, it’s fair to say I am. What followed with the eyes of disgust (not that he ever fed them ONCE) was him saying, “well you may like to inform your son of where his fish is”.

Cool, I got this covered, I decided I would simply look at my innocent little man, who has only been on earth for four years and tell him EVERYTHING with a heartbeat will one day die. I promised myself I would always be honest with my kids and when things crop up, I would get down on their level and talk them through it.

So I knelt down and held his little hand while he peered into the fish bowl. The conversation then went a little like this.

Bax: “mama where is the white one?”

Clearly the kid was over tired as I know he never bonded with that fish anyway.

That day I failed parenting, but I figure I can preserve his rose coloured glasses just a little longer.

When do you think is the right time to tell your child about death?