A Victorian school has banned hugging…is this good practise or too far?

When I picked my daughter up from school this afternoon, she and one of her best friends were walking out of the classroom, arms around each other, singing Breakfree by Ariana Grande. They looked like happy, gorgeous seven-year-olds, hugging and bonding over their love of annoying music, and just the sight of them made my heart swell with happiness. But is this affection in the school yard about to become a thing of the past?

It was reported today that St Patrick’s Primary School in Geelong West are “banning” hugging as a precautionary measure among students. Principal John Grant said that while “nothing in particular” had caused the ban, he felt “In this current day and age we are really conscious about protecting kids and teaching them from a young age that you have to be cautious.”

So how does Principal Grant suggest kids show their affection for each other? “There’s a range of methods including a high five or a particular knuckle handshake where they clunk knuckles as a simple way of saying ‘well done’,” he said. “There are also verbal affirmations and acknowledgements.” If I were 87 years old, I’d say this was a load of hogwash.

Because I haven’t been in primary school since the dawn of time, I asked my daughter directly how she’d feel if she and her friends were not allowed to hug each other at school. Here’s what she said, and I’m not paraphrasing: “That wouldn’t be fair, because what about if your brother, or sister, or one of your friends is upset or hurt and you want to put your arm around them and say, ‘It’ll be ok.'” And I totally agree with her. 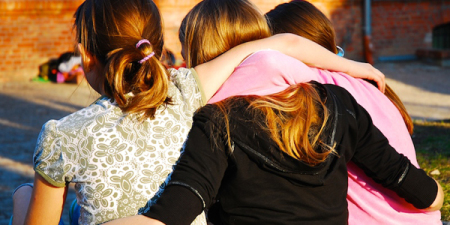 School is a place for kids to learn, but it’s also a place where they spend around seven hours a day, which is a big chunk of time. Just like our work mates often become like a second family to us, the same can be said for kids who grow up together at school. In my opinion, kids don’t just learn academics at school, they learn a whole range of things like compassion, friendship and the importance of values like social justice. It really worries me as a parent that when you take away simple acts of affection like hugging, which kids often use to show support and kindness to their peers, we’re headed for a generation of robots who will lose that innate ability to provide comfort to one another.

But what about those kids who don’t like to be touched? “We have a lot of kids who walk up and hug each other and we’re trying to encourage all of us to respect personal space,” Mr Grant said. “It really comes back to not everyone is comfortable in being hugged.” This is a totally valid point, and a child who doesn’t like to be touched should absolutely not have to deal with unwanted physical affection in the school yard – but isn’t that a great opportunity to teach kids to respect boundaries and regulate their behaviour when required? One child’s instinct to celebrate or provide comfort with physical touch could be another child’s no-go zone, and it’s really important that children learn that from a very young age.

The hope is that all kids will enjoy going to school, that it will be a place of learning and friendship in a supportive environment. I like to think that if my child is having a rough day, one of their friends can put their arm around them and comfort them in a way that makes them feel safe and loved. For my kids, that might be through physical affection, for some it might just be a kind word and for others, it could be giving them the space to process their feelings alone.

I think removing childrens ability to hug each other at school will just make it ‘forbidden’ behaviour, which frightens me. We’re all different and most importantly, we should all have our personal boundaries respected  and the sooner our children learn to accept and, for want of a better word, embrace that, the better.

What are your thoughts on this? Do you think hugging at school should be in or out?