Jesinta Campbell has broken her silence on her fiancee Lance ‘Buddy’ Franklin’s mental health issues with a beautiful instagram post.

Alongside the quote; “It doesn’t matter how this looks to other people. If this is something you gotta do, then do it. Fighters fight.”

She then wrote underneath:

“I would like to thank everyone for the support both Bud and I have received over the past few days.

This is an extremely challenging time for us and has been for some time now, however it has been made easier by the love, understanding and support we have been given.

Thinking of the many others who also live with this every day and are not as fortunate to have the support we do. I am incredibly proud of Bud’s strength and courage, this has not been an easy journey.

I am thankful for the support of the Sydney Swans, both of our families, friends and [our manager] Sharon [Finnigan].”

“We are not alone in this. My heart is with my man. The only thing I ask is that everyone respect our privacy at this time.” 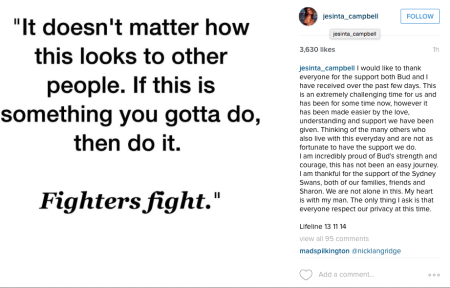 Jesinta also included the number for lifeline at the bottom of her post. It was revealed on Tuesday that Jesinta’s fiancee AFL Sydney Swans player Lance ‘Buddy’ Franklin will miss this weekend’s qualifying final against Freemantle due to “ongoing mental health issues.” He also revealed that he was dealing with mild epilespy unrelated to his mental health issues.

Jesinta is currently in Japan filming segments for Getaway. Jesinta and Buddy’s manager Sharon, who she thanked in her instagram post, made a statement saying that Buddy wanted Jesinta to remain in Japan and keep working. 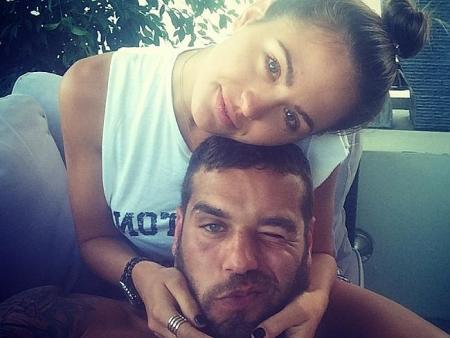 We wish this beautiful couple much love in their journey tackling Buddy’s mental health issues together.