Kanye West’s FULL American Idol audition just released – and it is all forms of fabulous!

Kanye, imma let you finish, but your best performance EVER was that time you auditioned on American Idol.

Love him or hate him, there’s no doubt that Kanye West is a prominent figure in pop culture. He’s a self-proclaimed “musical genius,” producer, fashion designer and one half of power couple, Kimye.

It’s not often we see his playful side, but in October last year Yeezus himself stepped into the American Idol auditions and performed a rendition of his hit, Golddigger, in front of delighted judges Jennifer Lopez, Keith Urban and Harry Connick Jnr. Kanye described himself as a a producer hailing from the south side of Chicago who always wanted to do rap, but “no one really believed in me.” 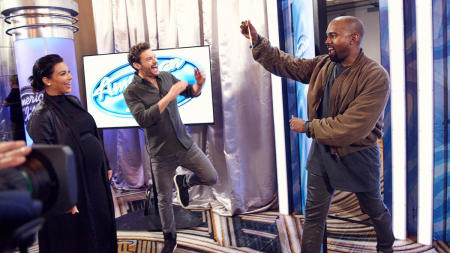 Now he has a ticket to Hollywood, this kid could REALLY go places!

A heavily pregnant Kim waited in the wings as her man performed and OF COURSE was awarded a ticket through to the next round.

His reaction is a side of Kanye we’d love to see more of. Turns out a smile really suits him.

What do you think of Kanye West?