Will my boys ever be mates?

My boys have a love/hate relationship. For the first year and a half of my youngest’s life, it was more of hate than love. My son Bax, now four and a half years old did not warm to our new addition Arlo AT ALL. I literally could not leave him alone with the baby or no shit, he would have killed him. It was stressful and unpleasant and I wished the days away. If I went to the toilet, as soon as I would unzip my pants, I would hear Arlo scream and I would  run out to find a guilty looking toddler staring back at me. It was normal behaviour but it drove my partner and I up the wall. Bax was the only child and grandchild on both sides up until Arlo was born, so he was spoilt rotten, then all of a sudden this other little thing moved in with us and he was having none of it.

It was around Bax’s fourth birthday that things started to shift. Arlo started to walk and began to find his older brother hilarious which stroked Bax’s mini ego and the violence turned down about 600 knots. Now they fight like normal brothers, one minute they are in love, the next minute one of them is howling and yelling. There is nothing I want more than for my boys to grow up as thick as thieves. I want them to be best mates and love and protect the shit out of each other. It is too hard to tell at this age if they are destined to be bum chums or have zero interest in each other.

I love seeing older brothers who are super tight, like the Hemsworths. Luke, Chris and Liam and besties but haven’t always been. Liam spoke about how back in the day they used to fight hardcore. This made me a little happy and gave me hope for my own little ratbags. 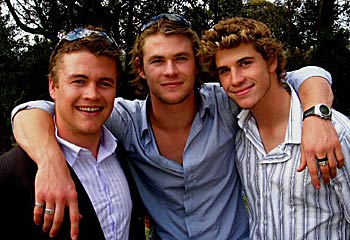 Chatting to news.com.au Liam said:  “Me and Chris didn’t get along very well when we were kids. Luke and I never had issues, maybe because he’s eight years older and at the time just seemed so much bigger and stronger. But me and Chris, for whatever reason, maybe because we’re both like-minded and stubborn but we’d constantly fight.

“But then again, I was a naughty little kid. I had a real temper and I would throw tantrums all the time and chase Chris with brooms and throw knives at him and all kinds of horrible shit,”

“There was one time when my parents went overseas for a couple of months and me and Luke stayed at my grandma and grandpa’s house. Chris had to stay at my uncle’s house because we were too much trouble for my grandparents. We couldn’t be together without having a fight.”

This is music to my earlobes.  My boys together are bloody hard work so we often split them between grandparents. Divide and conquer we say. We have to put up with it because they are our little feral men, but it is way too much at the moment to inflict the duo onto relies just yet. I hope knife throwing isn’t a part of my boys future, but it is comforting to know that even the closest of bros hated each other at one point.

What is the worst fight your kids have had?