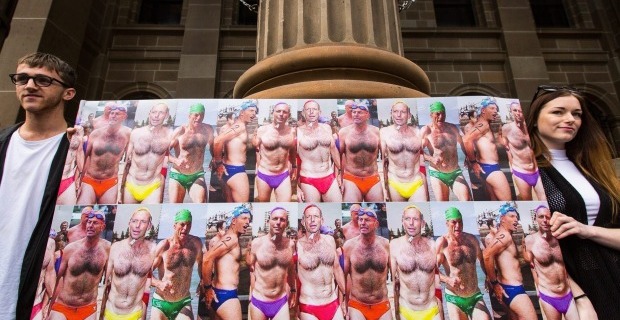 Did you even hear about this???

It isn’t a grey area. If you are in love and you want to get married then you should have EVERY right to do that. No matter what body parts reside in your pants.

I am more than fine with governments legislating over road rules, tax, alcohol levies and the day to day running of a country; but when it comes to love, absolutely not.

THOUSANDS of people who are  pro love and in support of marriage equality took to the street of Melbourne yesterday.

There were gay and straight people a plenty. They protested for what many see as a basic human right. To be able to marry the person that you love. 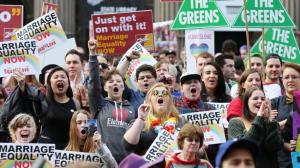 The public has spoken and poll after poll shows that majority of us support same sex marriage. 72% of Australians are in favour, the other 28%  in my opinion are naive and uneducated on what it actually means to be gay. To be treated as a second class citizen simply because of who you love is mind boggling.

Tony Abbott (Who has a GAY sister) and his Government are holding Australia back.   After a 6 hour long meeting earlier this week with the Liberals and National party members; the outcome on whether members are allowed a conscience vote on the issue of marriage equality lost 66-33.

Tony Abbott then publicly said  that if re-elected, the next Coalition government would put the issue to the people, meaning us. Tony, hello, SEVENTY TWO PERCENT have spoken. Stop wasting our time. Grow some balls and look your gay sister in the eyes and tell her she can get married! 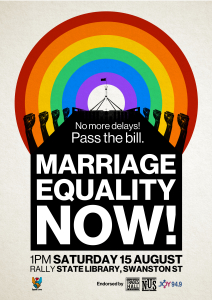 I woke up this morning and the first thing I did was jump online to read about the rally and see the pictures of the thousands who marched for equality. Naturally I assumed it would be plastered all over news sites and on the front page of Melbourne papers.

My blood started to boil. Thousands of people dedicated their Saturday to making a stand and having their voices heard on such an important issue and barely anyone reported on it.

Days like yesterday make me proud. Make me have faith and hope that majority of the strangers I pass in the street have similar values to me.

Today I’m angry, embarrassed and confused as to why it was almost impossible for me to find anything in the mainstream media about such an important rally.  Something that 72% of the country support.

Controlled media is dangerous, patronising and down right wrong.

So I encourage you to share this article or any other you manage to find on the incredible rally that took place in support of marriage equality yesterday. It was a peaceful, fun and powerful day and one that everyone should know about.

Man, this bullshit is exhausting.