Have you seen Miranda Kerr’s latest Harper’s Bazaar cover? If not, here it is in all its full, very nude and very posed glory.. 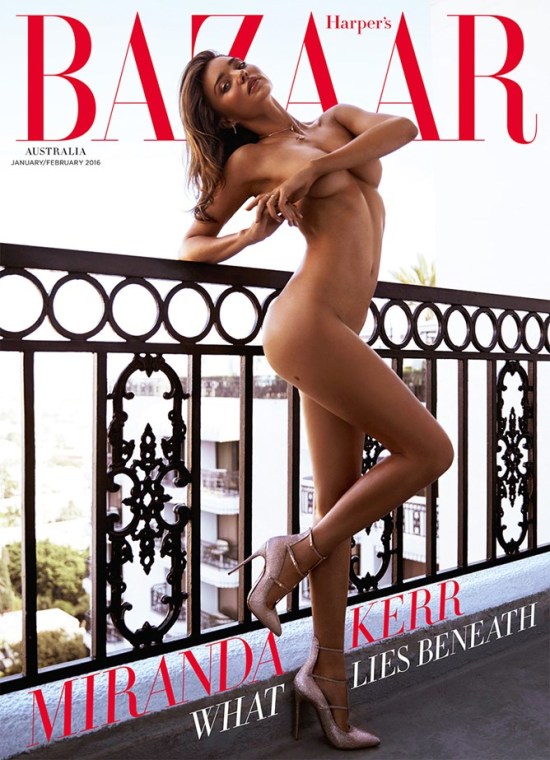 What do you think? Are you offended? Do you love it? Or are you just indifferent?

It’s not like it’s the first time we’ve ever seen a celeb in the nude before. Rihanna’s done it. So has Gisele, Adriana Lima, Serena Williams and Lana Del Rey. And who could forget the Kardashians? Even KOURTNEY got her gear off for a nude bum shot recently.

The controversy over Miranda’s cover is that supermarket giant Coles has made the decision to pull the January edition of Harper’s Bazaar from its shelves. An official spokesperson chain told news.com.au, “In response to feedback from our customers, many of whom shop with their children, we removed the magazine from sale earlier this week,” but failed to comment on whether the store had received any customer complaints.

Australian Editor of Harper’s, Kellie Hush, said she was “really disappointed to hear Coles made the decision to pull the Miranda Kerr issue off shelves.”

“I have had so much positive feedback from around the globe it is a shame Coles do not also recognise he artistic integrity of this image.”

Look, I’d be lying if I said I didn’t love a celebrity nude. I’m a total hypocrite when it comes to them, because while I don’t entirely agree with the way some of the raunchier shoots (Miley Cyrus, anyone?) act as an example for young women, I adore looking at them. When Kim Kardashian’s nude pics for Paper magazine came out, I reckon I looked at them for a stalker-ish amount of time.

But here’s what I think – I can choose to go online and look at any of those pictures. I can OPEN the inside of a magazine to check out an editorial on a nude celeb. I can do those things away from the eyes of my very young and very impressionable children. When I’m at the supermarket buying my wine and Dairy Milk (you know, the essentials), I don’t really want my kids to see naked people, particularly when they’re in a suggestive pose like Miranda’s.

I don’t want to answer the questions that go along with it, like “why is that lady naked when we’re not meant to show our private parts to anyone?” They have a lifetime to deal with body image and nakedness and all the shit that goes along with it, so if I can control as much of their exposure to it while they’re little, then that’s what I’m going to do. I can’t really control going to the supermarket though.

So ultimately, I think Coles did the right thing by removing the cover from the shelves….but I also think that mags are within their rights to publish nude pics within their issues if they want.

The solution to this dilemma seems pretty simple to me. The next time a magazine wants to feature a nude on their cover, put them on the inside of a double fold-out cover with a tamer pic on the visible cover. No complaining from parents, and the mag still gets to run their nude pics.

What are your thoughts on nude magazine covers? Should they be able to be sold in supermarkets?