The no-shit reality of morning sickness.

Sophie Cachia from The Young Mummy chatted about her shocking morning sickness On The Couch and I related to Every. Single. Word. Reminded me of that time that makes me quiver when I think about it.

Before I fell pregnant I’d heard many women talk of the dreaded morning sickness.  But until I experienced it for myself, I didn’t understood how crippling it can be. And who ever titled it ‘morning sickness’ was only telling a small part of the truth. Filthy liar.

Two thirds of women experience morning sickness in some form during their pregnancy, most in the first trimester. However, only a handful suffer from the extreme and unrelenting morning sickness known as hyperemesis gravid arum, (what an ugly name). That was me.  I was just like my mum, who had it right up until the day she gave birth with myself and my two sisters.

My WHOLE pregnancy I had hideous nausea – and a good vomit or two, sometimes more, every day. You know how sometimes when you feel sick and then you vomit and things ease up a bit? Well that doesn’t happen when it comes to morning sickness. There is no relief.

For the first 25 weeks, the nausea and  vomiting would occur  any time of the day or night. After the five month mark, I got a little relief as the day went on but my the nausea/vommiting alarm would go off at 3am religiously. Oh how I miss that alarm clock, such joy! 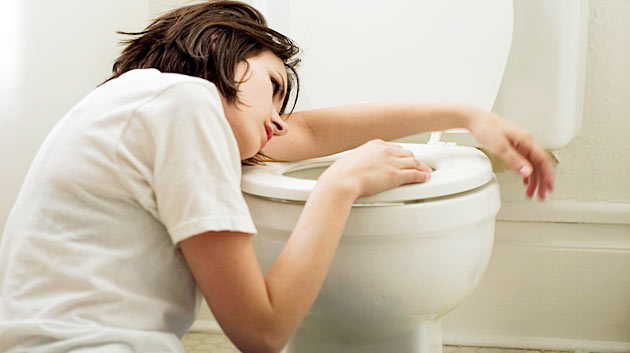 I tried everything – acupuncture, ginger-flavoured everything, crackers, reiki, tablets such as Maxalon and Zofran – you name it, I tried it. NOTHING worked.

I was lucky enough to fall pregnant through IVF, and would have suffered through morning sickness every day for an extra 10 months if that’s what I had to do to have kept my mini human safe and sound. But  having said that, there’s no denying it was a bloody rough ride. And to top it off, I felt a little guilty talking about it. Like it’s was privilege to be pregnant and I was ungrateful and even whimpy to complain about it. I knew there were a million women having trouble falling pregnant and only wish they were going through the morning sickness I was.

I constantly felt like I should have just sucked it up and not told people the truth when they asked how I was.  I felt like I couldn’t talk about it at work, and certainly couldn’t take a day off work with it. I mean, if you had food poisoning and were vomiting all day, you’d take the day off work and that would be totally acceptable. But I never felt like I could take a day off with morning sickness, I thought that people would think that it was a pretty weak excuse and it wasn’t a ‘valid’ sickness. My rational self knows that is not at all the case, but that’s how I felt.

I rode out my pregnancy and bonded big time with the porcelain-enameled bus. It felt like torture at the time, but with my baby now a toddler, every last vom was totally worth it.  The minute my little lady exited my body, so did the chronic morning sickness. I was almost more thrilled about that than the tiny human I was holding.

Did you suffer from bad morning sickness?