A Melbourne mum’s intense grief after giving birth to a stillborn baby was made much worse after retailers refused to let her return expensive baby items. Belinda Ainley has spoken out about the lack of support for grieving parents of stillborns, after her son, Ash, was born at 38 weeks on Easter Sunday this year.

The devastated mum tried to return baby items, such a $611 cot, to a baby store but her appeal on compassionate grounds was refused, and she was offered a partial refund because it wasn’t in its original packaging. She was also unable to refund a $100 gift voucher to another store and told to read the fine print.

Speaking to The Sydney Morning Herald, Belinda said: “There was no compassion from the people that work in industries that are supposed to be all about babies. You’re left feeling like you not only don’t have your baby, but that you don’t count because everybody feels too awkward to talk about it and so nothing happens.”

She said she also felt a lack of compassion from the hospital and was told she did not qualify for an early discharge package despite a two-day stay because the package was ‘geared towards babies’.

I’m a mum of two healthy daughters but before they were born I had a miscarriage. The treatment I received from the hospital was horrific. I bled on the hospital waiting room floor for hours and was then sent home. After starting to haemorrhage at home I returned to the hospital to be greeted with “you again”.  After leaving me alone on a hospital bed for 15 hours, I had a panic attack, I was so frightened I was never going to be a mother and that what was happening might ruin my chances of falling pregnant again. No-one spoke to me or reassured me and no counselling or support was offered.

The final straw was waking up in a maternity ward, after a D & C (a surgery which removes the remains of the miscarriage), surrounded by mothers and crying healthy babies because the other wards were full. 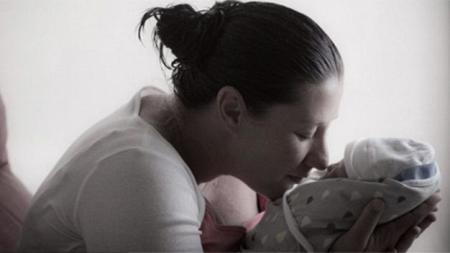 Belinda and her son Ash

For women who have given birth to stillborns or had miscarriages those babies are still a part of our lives. A part of our identity and we will always grieve for the future we imagined, that won’t happen. I can’t imagine the agony Belinda felt when she finally gathered up the courage to pack away her baby son’s items and then to be faced with such lack of compassion by the hospital and baby stores.

We need to talk openly about stillbirth and miscarriage so we can support mums and dads who are grieving the loss of their babies instead of pretending they never existed. I have so many friends who have endured the silence from people who don’t know what to say or do after giving birth to stillborns or having miscarriages.

After Belinda tried to sell her cot on a buy, swap and sell Facebook page, a stranger set up a Go Fund Me page for money to cover the cot, with over $1895 already raised. An overwhelmed Belinda said the cot will be donated to St Kilda Mums, and the money will be donated to the stillbirth charity SANDS and Heartfelt, which provides volunteer photographers to families who have lost children.

We send much love to Belinda and her partner Aaron after the loss of their beautiful son, Ash.

If you need support for stillbirth, miscarriage and neonatal death, call SANDS on 1300 072 637.