How old is too old for a dummy?

It’s a crazy world we live in when four-year-old Harper Beckham makes news for sucking on a dummy. Seriously people, have we done a Ken Bruce and gone completely MAD?

This picture was posted as part of an article run by a major publication headlined “Why does Harper, four, still use a dummy? Experts warn David and Victoria Beckham’s little girl may end up with ‘speech or dental issues’ if she continues to use one.” 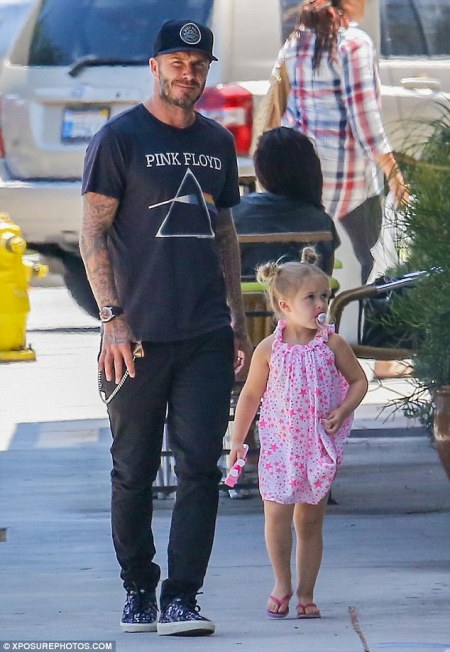 Geez, thank GOD for those experts….that dummy looks like it’s really going to mess her up. What comes next? If a celeb-tot is photographed without a jacket in chilly weather, will there be uproar over a possible case of the sniffles? It surprises me that there seems to be so much concern surrounding that dummy, but nowhere near as much concern about what the bright lights of a paparazzi’s camera flash could be doing to her.

Seriously though, David and Victoria Beckham have four children. I reckon they’ve got this.

I’m sure that at some point during their rise to mega-stardom, Posh and Becks were aware that along with the glitz and glam of celebrity would come the glaring eyes of the media. Sure, we all love a bit of a scandal. When they went through the whole nanny-affair business, I read along like everyone else. But when their parenting is called into question over a pap shot of their kid with a dummy? That just seems creepy to me…but the thing is, people are going mad for this story. EVERYONE has an opinion as to whether little Harper should be sporting a dummy or not.

As far as dummies go, I bloody loved them. When we had our daughter, they gave some much-needed relief to two sleep deprived parents who were at their wits end with a crying bub – they were the only thing that seemed to calm her down.  And my girl LOVED hers…they had names (bluey, light-bluey, pinky and purpley) and they were her bedtime friends until she was four, just like Harper Beckham. Now, I will admit that when it was time to say adios to her dummies, she looked a little like she was coming off crack for the first few nights, but she was old enough to be bribed with gifts from the ‘dummy fairy’ which helped a little. She’s been clean for three years now. She also has lovely teeth and great speech.

I think the thing we should be focusing on is that Harper Beckham looks like a happy and well-loved little girl. Even if that dummy does cause some kind of dramatic dental disaster for her, I’m sure Posh and Becks will be all over it.

Did you give your child a dummy?