I reckon kid’s parties are SO over the top now. I tried to keep up and lost!

When my daughter turned one, I threw her an Alice in Wonderland themed party. There was a professionally made Alice cake, lolly bags with ‘eat me’ tags and way too much food. My daughter didn’t have a clue what was going on, but did that stop me? No. The next year I threw a dinosaur themed birthday party complete with face painting and way too much food. And I kept going till I invited her entire kindergarten class to a halloween themed fifth birthday party.

Later that night as my daughter threw present after present over her shoulder without a care in the world, I felt sick.  I had created a monster. In a moment of clarity I told her to pick two presents and packed the other 30 presents away. Two years later some of those presents are still packed away as I gradually bring them out so each one is appreciated completely. Because all the other kids we knew were having extravagant birthday parties, I felt so much pressure and worried she would feel left out if she didn’t get one too. In that process I had failed to teach her the values I really want her to have. 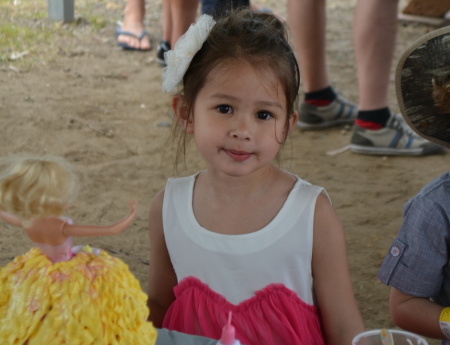 Kristina Kuzmic, a blogger who recently uploaded a video  I’m not your friend, kid! (Because I love you.), explaining how she doesn’t care if her kids get mad at her because she’s trying to raise them to be good human beings not her friend. The video went viral and just yesterday there was a Facebook comment by a man who’s mother took away all his eighth birthday presents that really showed parenting at it’s best. Carlos R. Esposito wrote: 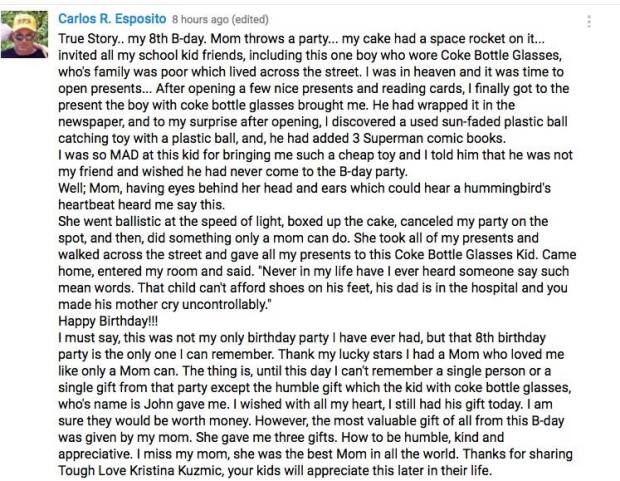 What a mum!! It’s tough love to shut down your kid’s party and take away all his presents but what an amazing  life lesson she taught him in that moment. To appreciate people and not presents, and to be grateful for what you have because not everyone has what you do.

I’ve stopped the big birthday parties and replaced them with a day at the movies with a friend, and instead of spending hundreds of dollars on a present, I spend a much smaller amount on something I know my daughters will love, and their happy grateful faces when they rip open that one present with joy, is all I need.

You can watch the video that Carlos responded to below: