When you are ready to have a baby it immediately becomes ALL consuming. Your brain power is sucked up by the ovulation/bonk time vortex.

We spend so much of our lives lives trying to avoid sperm meeting egg, so when the clucky sets in it can feel a bit overwhelming.

I was a bit clueless when it came to things like ovulation, when I found out we have like a 48 window to get the job done, my small mind almost combusted. One in six couples have difficulty falling pregnant and even couples with normal fertility have a 1 in 4 chance of falling pregnant. On average it can take up to a year to conceive. That is why often the process of trying to make a baby is far from romantic and fun.

There are obviously a few ways to check if you are ovulating, things like checking your temperature and the state of your undies (ew). There are also the ovulation wee sticks and some other elaborate things. I tried a few, but my mind is simple and I found some of them tricky and annoying. Then a friend gave me an ovulation tip and it was a winner for me. It’s called the maybe baby (they ain’t paying me to write this by the way, but I’m totally open to it). It isn’t cheap, around $80 bucks but it’s worth it and I lent mine to friends after I used it as well…don’t worry it doesn’t go near the vajay, it’s shareable. 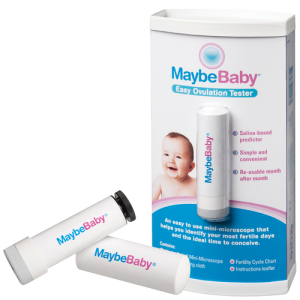 It is a mini microscope that you essentially put your saliva on and then once it has dried (like 5 seconds) you look through the microscope and if you are ovulating you will see a fern shape. 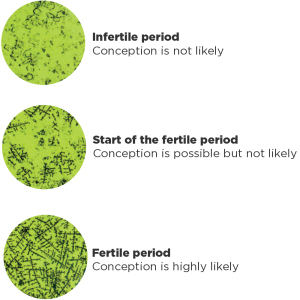 Bron McCahon, former Cosmo Editor joined me On The Couch and we spoke about this little stick that we both used below.  You can get these from most chemists.

What is your ovulation checking tip?