Do you think it is ever ok to take home the alcohol and snacks you brought to a party?

When we were 16-years-old it was acceptable to rock up to a party without bringing a plate and only enough booze for yourself. It was also acceptable back then to take your left overs home with you. A half drunk UDL would save for next weekend for sure. We were young and tight with our coins.

This shit does not fly as an adult. It’s common knowledge that you NEVER show up empty handed to a party, even if you were told not to bring anything. Bring dip and a bottle of vino at the very least. And if you don’t eat and drink said dip and wine then you leave it for the host. Are we all on the same page? I reckon 99% of us are but apparently some of us are still 16-year-olds at heart and tight-arses.

How is this story for a good old party cringe. A lady held a shindig for a mate at her place, generous and nice thing to do. She did not know all of the people who would be attending but asked if they could bring something along. Half way through the party, several guests decided to leave and they took all of the leftovers with them. The cheese, crackers and booze they brought into the house, also left with them. Were they 16-years-old I hear you ask? NO! They were full blown adults. How foul is that.

Take your plate but leave the actual food on the plate. I think we all may still have one or two of these ’16-year-old’ friends in our circle.

Below is a post the host wrote asking if she is being unreasonable to be ‘completely outraged’ by what these guests did. 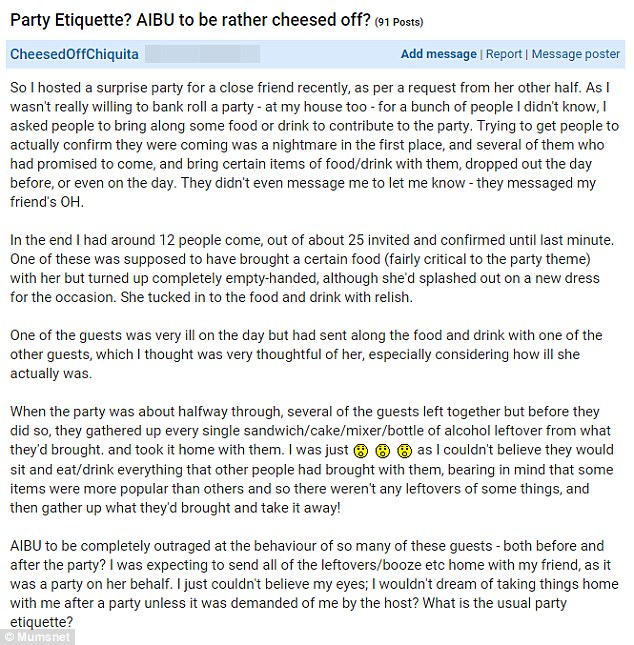 She is pissed off…and I think it’s rightfully so. Fancy taking a plate of something to a party, or better yet, your bevi’s to a party and collecting them on your way out.

Does this sound as crazy to you as it does to me? Listen, I get that money is tight for most people – and it’s hard to part with something that could bring you a world of joy once back in the comfort of your own home…but perhaps the best solution is making your food or drinking your drink ALONE at home and not attending the party. Just be a buzz kill not a total stingy ass. 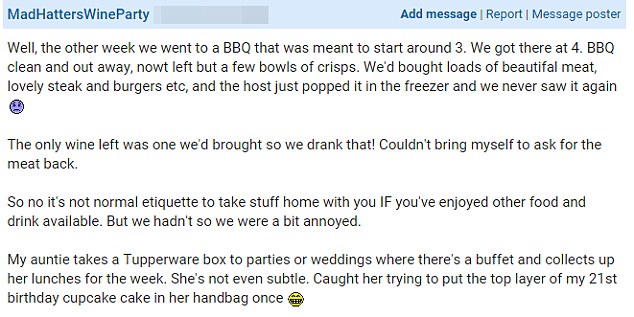 What do you think? is it okay to take your party contribution home if no one eats it?