Periods are annoying enough as it is, but for some women, the pain that comes with their monthly flow can be debilitating. Not every woman feels comfortable enough to publicly announce that her uterus is sore because it’s “that time of the month” and this can often make it difficult to deal with a full and demanding work day. For those who suffer from chronic period pain, just getting out of bed can be a challenge, because for some women, Naprogesic just doesn’t cut it.

For every woman who has ever said a silent prayer for someone – anyone – to invent some decent pain relief to help out when Aunt Flo comes to town, you’re in for some good news.

This small device, manufactured by an Israeli company of the same name, claims to provide relief to a cramping lower abdomen via electronic frequencies delivered directly to the site of pain, essentially blocking the brain/lady-parts connection. Livia says the relief if instant, and will continue as long as the device remains attached.

Bari Kaplan, the chief medical adviser for Livia, told Cosmopolitan the way the device works. “Mainly it’s working on a thing that we call the gate pathway,” she said. “It blocks any pain sensation message that’s going through the spinal cord. Everything else will continue normal, it doesn’t change the flow of [of your period].” 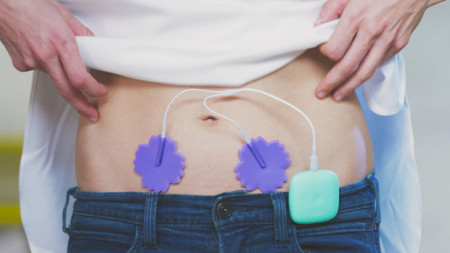 Could this little device make period pain a thing of the past?

So far, 3267 people have used the device and are singing its praises, however Livia will require the public release of their own studies as well as independent trials. Almost $400,000 has already been raised as part of Livia’s crowdfunding campaign to get the device completely off the ground and into the hands (and onto the abdomens) of ladies everywhere. Hallelujah!

Here’s a vid the ladies from Buzz Feed filmed of them actually using Livia during their period and their personal results. Lookin’ hopeful…

What’s your go-to for period pain relief? Would you give Livia a go?