Can men and women ever really be ‘just friends?’

Something AMAZING happened at (well, near) Coachella on Saturday. It had nothing to do with fashion, or even the music, it was two single celebs snapped in public together. They weren’t just any celebs either, it was Leonardo DiCaprio and Rihanna, so it’s clearly all systems go on the romantic front. Speculation is rife that these two are doing the cha-cha because WHY ELSE would they be talking to each other?

Here’s a closer look at that pic… 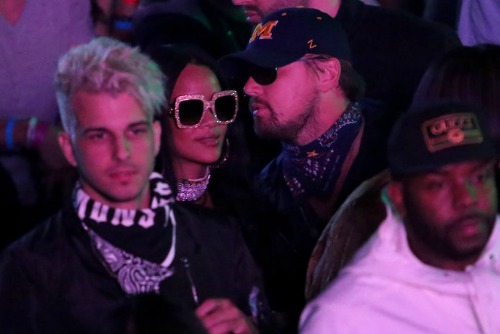 Can’t you see that look of love in their eyes? Well, you would see it if they didn’t have sunglasses on, but you can just imagine it can’t you? I mean, WHY ELSE would they be standing near each other? Surely they’re gettin’ it on.

In a couple of months, it’s possible that these two impossibly hot celebs could be an item and I’ll have to eat my laptop, but WHY oh why do we always jump to conclusions when we see a guy and a girl together? If they’re single, they must be hooking up. If they’re married, then they must be having an affair. It’s annoying and downright immature don’t you think? Since when can’t a penis and a vagina just be friends – not friends with benefits – just legitimate, platonic friends.

One of my best friends is a guy. My ‘brother-from-another-mother’ Reuben and I have been as thick as thieves since he filmed my wedding 12 years ago. Our level of attraction to one another is probably up there with what you’d feel for your real-blood brother or sister – in other words, non-existent. We can tell each other anything, slob around in front of each other and there have been farts of epic proportions – from him, not me. I’m a lady.

He taught me that getting your kebab toasted is not an option, rather a necessity, and I taught him that Serial and Making A Murderer were both worth his time.  You know, the important stuff.  We enjoy each other’s company and can swing between non-stop conversation or sitting in comfortable silence, just like the type Uma Thurman talks about in Pulp Fiction. Together, we have celebrated the births of our children and supported each other through some of the best and toughest moments of our lives. He’s my homie and like any good one, I know he’s got my back and I’ve got his.

For me, the question of whether a man and woman can be full-blown platonic friends is a no-brainer. My male friendships in the past haven’t always been like this though, and particularly through high school, I had many male friends, however there was often the hope of a bit of cheeky hanky panky from one side or the other. That’s why when you find that magical unicorn of friendship you’ve gotta hang on to it.

It’s sort of ingrained in us as a society that friendships with the opposite sex are ultimately going in the direction of, or already are, of a romantic nature.  I see those good-natured jibes manifesting before my eyes with my own kids. “Is he your boyfriend?” my daughter has been asked when she’s been seen playing with a male friend, to which she screws up her face and says, “No, he’s a boy and he’s a friend!” She’s still too little to understand the complexities that often come with opposite sex relationships and I love that – and I hope she holds true to her declaration of “a boy, and a friend” forever, because if you’re lucky enough to have one, those friendships are some of the best, honest and most fulfilling relationships you can find.

Do you have a close, platonic friend of the opposite sex?