This is the ACTUAL reality of potty training. I have just come out of a literal shit zone!

I have just finished potty training my youngest son, Jarvie, (insert me banging my head up against a wall right here) and by finished I mean, the odd accident here and there still pops up.  I try and potty train my kids just before they turn two because I like to think they’re too little to figure out what I’m really trying to do. If I were them I would want to stay in a nappy as long as possible, going to the toilet is bloody annoying.

My mum always said, ‘kids will show you a sign’ when they’re ready to be potty trained and for my two it has proven to be true. What hasn’t proven to be true is the bullshit 3-day potty training thing. Granted they might get the concept in that three days but seriously, the shit and piss is still flowing quite freely outside of that three day period and it aint always into a potty..

After successfully having potty trained two mini humans. This is what I KNOW to be true.

1. You will constantly feel like you’re covered in shit – especially underneath your fingernails. You will feel the incessant need to scrub the crap (no pun intended) out of yourself…that smell is HARD to get rid of. Your hands will be dry and scaly and you will feel like you’re hanging out in a porta-potty for a least a month of your life.

2. The first time your kid thinks they have peed in the potty they actually just did a little dribble accidentally. Then, you have to dance around like a dick wad to let them think they’re a genius when inside your head you want to scream, ‘just fucking do it.’ 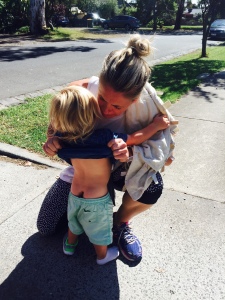 This was day EIGHT for Jarvie! Just took a crap in his pants.

3. As I said above and I need to say it again…The 3-day potty training method is a LOAD OF SHIT – it takes a few weeks…and even then they will shit and piss their pants more often than you can count. Sign yourself up for a few weeks, months, years in some cases.

4.  The only thing I have found that works is asking my kids every 15 minutes if they need to wee or poo. You basically become an annoying toddler…constantly nagging them and following them around so they don’t destroy your favourite rug.

5. Your back will hurt from constantly pulling their pants down, sitting them on the potty and pulling them back up. Jesus, I’m sick of that. You will instantly wonder why you bothered potty training them. Letting them sit in a soiled nappy is much less work.

6. A little dribble in their undies does NOT require an undies change. That means they’re learning to hold it. High five yourself because you’re finally starting to win.

7. You will never be so excited as the first time they actually get it right – it’s like one of the biggest parenting requirements ticked off your list and for those of you that are massive to-do listers like me, you have just conquered a REALLY annoying parenting to-do.

Now, all that being said…Good luck! Don’t flip out and be prepared to turn into a permanent Wiggle all day every day (armed with bucket loads of treats for bribing) for a few weeks.