“Should mums shut up and pack the lunches while looking grateful and slim.”

Rachael Finch has copped it this week. She is a bad mother. Apparently. In a recent interview, the 28-year-old model/brand ambassador spoke of her family’s childcare arrangements, which have been branded ‘unorthodox’, ‘lazy’ and ‘selfish’ on social media. In a proactive effort to keep her relationship buzzing, Rachael arranges for toddler daughter Violet to spend every Friday arvo until Sunday morning with her grandma. The mummy mafia is not happy:

‘…Pathetic parenting…can not understand why someone would have a child if they don’t want to raise them.’

‘Should reconsider their parenting skills! All parents I know would not prefer to ‘fob off’ their kids, we cherish every moment!’

‘It’s terribly sad that that she is choosing not to spend free time with their beautiful little girl.’

For the woman who chooses to become a mother, judgment is apparently inevitable. You’re on watch, and there can be no mistakes or regrets. Consider yourself on active duty until the day you die because that’s just HOW IT IS IN MOTHERLAND, so shut up and pack the lunches while looking grateful and slim. 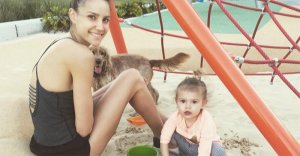 Rachael exists in a completely different world to most working parents, yet she has been judged against the strict universal guidelines of Proper Motherhood. Branded a shameless narcissist and a pitiable failure who doesn’t understand what true dedication is all about. She’s had to defend herself since the criticism, posting an Insta selfie with Violet and reaffirming that, yes, she loves her daughter, thanks, and she works hard, too.

Let’s remember for a moment that this woman does not have an average week. Her schedule is no doubt busy, but she’s not spending 40 hours in a cube toiling on Excel spreadsheets before coming home to warm chardonnay and leftover stir-fry. Her image is a business, which means ‘work’ for her involves photo shoots and media appearances and Pilates. That is her JOB and it’s flexible and impermanent.

Now let’s be upfront about what she’s ‘providing’ – money and access. Certain opportunities will be available to Violet, thanks to a financial leg-up in life. That might be good education, the best food and healthcare, the ability to travel freely or a personalized Porche. Whatever. It’s a position of privilege that Rachel has worked to secure in the short window of time that ‘being young and beautiful’ is valuable. She has also chosen to allocate time to herself and her relationship, in support of the family unit as a whole.

Does all this mean she’s away from her official mummy post for ‘too many’ hours? Whether Rachael is a good parent is not our call. All that matters to Violet is how mum makes her feel.

If you want to see a poor role model, look at the women on social media (and it’s mostly women) giving shit to media personalities they don’t know. Adults who presumably have jobs and families and real lives but are choosing to be face-down in their phones, motivated by some irrepressible need to comment on What Other Women Are Doing Wrong, adding nothing of value.

Rachael volunteered some private information under the popular celebrity illusion that it would make her more relatable: ‘Hey, I juggle work and motherhood too, I’m just like you!’ But it backfired, and now she has to repent for forgiveness. This is what happens to those who misstep in Motherland. It’s patently obvious that her home life is not a terrible tragedy or a disaster. The child is safe and loved and no one needs to be feeling sorry for anyone in the Finch family, which is more than can be said for the non-privileged. There are 200,000 kids in Australia at risk of being harmed in their own homes today, in unstable families where there’s more yelling than talking and more slaps than cuddles*. Kids who aren’t fed and clothed properly, let alone given organic smoothies or taken to ballet every week or Bali for a family holiday. These are the children that need us shouting for them, not a famous tot on Instagram.

Rachael might not live in a world we can relate to but this week she’s just another woman who feels bad about herself because of something hideous she read online. Don’t fret about Violet. It’s grown women we need to be worried about. What are we doing to each other?