It’s coming up to 14 years that I’ve been with my boyfriend Sam. That is like soooo bloody long, like a lifetime. I don’t feel old enough to have been in a relationship for that long and I definitely don’t feel old enough to be a mum, even though I’ve bred twice. Sometimes when I’m out with my boys I secretly hope people think I’m the nanny. No chance of that, but a girl can dream.

It took a few goes for Sam and I to get our shit together at the beginning. It was a bumpy start and for a while there I didn’t think it was going to happen. To say I was a sad Sally about that is a tad of an understatement.

Do you remember the very first time you saw your partner? I do. Sam and I worked together and I clearly remember seeing him for the first time. He was getting into his green Sonata out the back of work and he was wearing blue jeans and a red jumper and had this cool mohawk thingo going on.  As ridiculous and embarrassing as this sounds,  I reckon pretty much fell hardcore in love with him on first glance.

He was in a relationship so I crushed like a psycho from afar.

It wasn’t until he and his girlfriend broke up (and I quietly fist punched the air) that he learnt of my existence. I didn’t think I would ever have a chance with him cause he had that cool hair cut and would go to things like gigs and he was a vegetarian and he was way cooler than I was.

Through work we had mutual friends and we would be at the same drinks or end up on the same dance floor of a filthy night club. I tried so bloody hard to play cool and dazzle him with my wit, eyelash fluttering and drunken dancing, but the truth was, I was a massive desperado for him. Playing cool when you are anything but is an Oscar award winning performance I tell you.

One night we ended up pashing and it was fucking excellent. He would occasionally call and we ended up watching Australian Idol every Sunday Night (go the fro). The thing is that he hadn’t been out of a relationship for long and was definitely not ready for a new one… the thing that made that apparent was every time we were together he would speak about his ex ALL THE TIME! 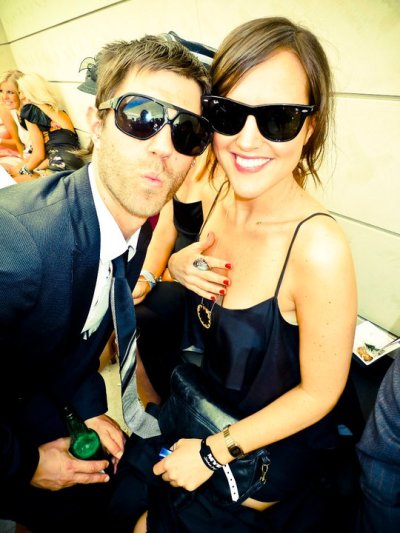 Sam and I about six years ago

So we mucked around for a while then went our own ways cause I was pretending I was cool just being ‘casual’ when really we know I wasn’t.  He wanted to be friends and I wanted to marry him and have his babies and stare at him like a creep while he slept.

Then, he ended up coming back and wanted to be my boyfriend and I was like “you bloody bet”, but it was far from how I wanted it to be. I could not be myself around him cause I was still a secret dork that enjoyed Mariah Carey music. I also knew that he wasn’t in love with me the same way I was with him. After a few months it ended again.

I have never, ever, ever, in my entire life, still to this day, felt pain like I did after we broke up. We hadn’t know each other for that long and it was a pathetic attempt of a relationship, but I loved him. We connected so much and had a ludicrous amount of fun. I knew we were over, but I also found it odd that I could feel so connected to someone and them not feel the same. It was a hard thing to swallow and made even harder considering we worked at the same place. I tried to avoid him like the plague because seeing him made it hurt so much more. 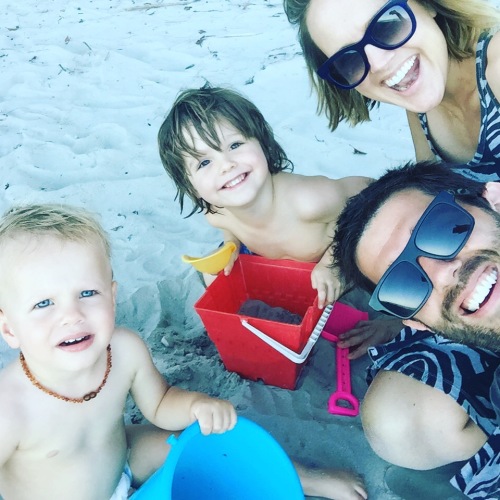 Sam and I with our son’s Arlo and Bax

I turned into a tragic movie, I cried in my room for weeks on end and would only leave the house to go work and if my friends literally forced me. I was so bloody sad and heart broken.

Although breaking up was the hardest thing I have been through, it was bizarrely also one of the best. Even though all I wanted to do was call him every second, I didn’t, I was as strong as I could be. I would not go where he was, I would not accidentally bump into him, or stalk his house (big deal for me, I love a stalk). I was hurting too much and I knew the only way to move on was to go completely cold turkey on him.

It was only six weeks that we were apart so all this sounds very dramatic. I did become stronger and more sure of my self in that time apart and I also knew that although I loved him beyond words, if he could not love me back as much then it would never have worked.

Then one afternoon he showed up at my place. He finally realised that I was as cool as shit and the time apart made him realise that he was ridiculously in love with me.

We got back together and it was the best. At this point in time, I was totally comfortable with me in the relationship and even though he still had cool hair, I could tell he was besotted with me and 14 years on, he still is. I still think he still goes alright too.

I promise I am not as psycho as this may sound. Ha. Okay, a little bit.

I chatted to Sylvia Jeffreys On The Couch about her and Pete getting together and their story is beautifully old school. Check it out below.