Don’t be a ‘Do Nothing Bitch’!

The biggest female athlete in the world right now is Ronda Rousey.

An Olympic medalist, Rousey has taken over the world of mixed martial arts to become the stand-out star of the Ultimate Fighting Championship. The first female fighter in the competition, she defeated a recent opponent in 14 seconds with her signature move – an armbar, which is submission by forcefully restricting the movement of an opponent’s elbow joint. UFC President Dana White – who once said women would never fight in his organisation – has called her a ‘game changer’ and compared her to Mike Tyson in his prime. She’s also just been Beyonce-approved.

During an episode of UFC Embedded, Rousey responded to criticism of her muscular body with a viral tirade against the haters: 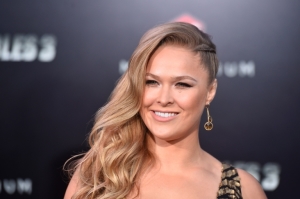 “I have this one term for the kind of woman my mother raised me to not be, and I call it a do nothing bitch. A DNB. The kind of chick that just tries to be pretty and be taken care of by someone else. That’s why I think it’s hilarious if my body looks masculine or something like that. Listen, just because my body was developed for a purpose other than fucking millionaires doesn’t mean it’s masculine. I think it’s femininely badass as fuck because there’s not a single muscle on my body that isn’t for a purpose, because I’m not a do nothing bitch.”

She’s since filed to trademark the ‘do nothing’ catchphrase, and her speech was re-played to the crowd before Bey performed at the Made In America festival last week. Rousey, at 28, is changing the world of sport. She is currently undefeated, having won eleven of her twelve fights in the first round. Her fights are thrilling to watch – if you’re into that kind of thing. Out of the ring, she’s outspoken, unpolished and ballsy: A web series host made a sexist joke about her ability to take on a man, so she broke four of his ribs in a takedown. Rousey is undoubtedly a new kind of feminist hero. Her rough-and-ready approach to the media and intrinsic involvement with the UFC has quickly divided opinion on her status as a worthy role model.

MMA as a sport is often dismissed as barbaric and pointlessly violent; a bloodthirsty boy’s club. It was famously dubbed ‘human cockfighting’ by a US senator when it hit mainstream in 1996. Despite Rousey’s technical skill and world-class athleticism, there are few media outlets able to report objectively on women in the MMA. Sportswriters continue to turn the female form into currency, so she – and other female fighters – constantly need to defend their body in a way male counterparts are never asked to.

The UFC organisation has long been plagued by pay disputes, drug scandals and controversy. There are troubling allegations of domestic abuse patterns among male fighters. Coupled with frequent blazing social media bust-ups and a deeply sexist façade, the UFC has a major image problem. But that’s not really Rousey’s problem.

Born with burning determination, she’s dominating in a sport that, until she came along, had exactly zero options for women besides ‘ring girl’. She views her body as a source of power and harnesses it with precision and ferocity. This week, she told Ellen she’s the highest paid fighter in the UFC: ‘It’s pretty cool…it’s fun to say’. An intense, unbelievably focused athlete, Rousey is committed to her job. Train hard, fight hard, get paid. Far from doing nothing, she’s headlining the show and giving new meaning to the words ‘fight like a girl.’

A major UFC event will be held for the first time in Melbourne in November, with Rousey confirmed to fight Holly Holm. The event is expected to break the all-time attendance record in the organisation’s history. Tickets on sale to the public via Ticketmaster on Monday 21st September.