Hey Girl, Ryan Gosling wants to set the record straight about something…

In a case of better late than never, this is just too good not to share.

So Ryan Gosling, dream-man to women all over the globe, wants you to know he NEVER said, “Hey Girl.”  Yep, devastated. Just as a reminder, here’s a few of the legendary ‘Hey Girl’ memes of the Goss that we’ve come to know and love… 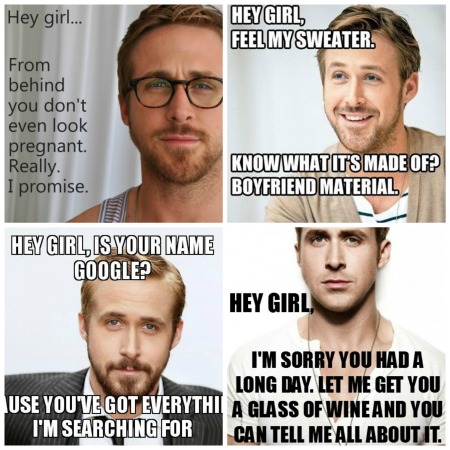 We can’t get enough of these…

In a hilarious video from BuzzFeed, Ryan’s The Nice Guys co-star Russell Crowe confronts him about the never-ending stream of romantic merchandise bearing his crazy-gorgeous face during a couples therapy session, and the runaway train that is “Hey Girl.” It’s then that Ryan drops a bombshell.

Soak it in ladies…Ryan Gosling claims he never said “Hey Girl.”  We’ve been duped.  We’re just gonna bury our heads in the sand and act like this never happened.