Did anyone else do seances when you were a kid?

Pretty much every single slumber party my friends and I had when we were kids, we would set up a DIY oujia board and do a seance.

We would turn off all the lights, put on a candle, place our pinky fingers lightly on a glass and call upon the spirits of the dead. Then we would wait like scared little pigs for the dead to give us a sign.

It was seriously so bloody scary. Just the anticipation of ‘who’ might come made us crap our dacks, but I couldn’t get enough of them. To this day I still believe that the glass was not moving on it’s own. Is that foolish? Maybe, considering we were only 11 years old and all loved a bit of drama, but we would all swear black and blue that it wasn’t us making the glass slowly shuffle across the board. We would call upon anyone we could think of that had died including celebs. One time, the glass fell over at the same time a cupboard door slammed. That was the end of that seance.

People used to say that if you summonsed a spirit, sometimes they would get trapped in your home and haunt you. Needless to say, I never did a seance at my place cause I didn’t want no spirits lurking around, but of course I was bang up for them at someone else’s joint. I did, however, hear that one time one of the spirits followed someone home. Oooooohhhhhh. 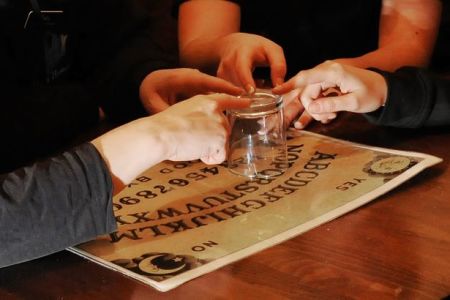 I’m not really into this kind of stuff now, I’d never do a seance, mainly because I couldn’t be bothered writing the alphabet out and placing it around a board, but also cause a part of me thinks it’s best not to mess with stuff you have no idea about.

I do love my memories of our dances with the dead, even if pinky fingers where more involved than I like to admit.

Did you do these as a kid? Do you reckon they work or it is a load of shit? I’m still torn.