The news has us whooping with delight, because for the first time in the show’s 21-season run, a female will take the lead among the blokes.  It’s not just because Rebecca is a woman though – it’s because she has been chosen as the best PERSON for the job, not the best man or the best woman. She’s got the knowledge, the experience and the goods to back up her appointment and will provide a breath of fresh air to the show after Garry Lyon’s exit following his battle with mental health. 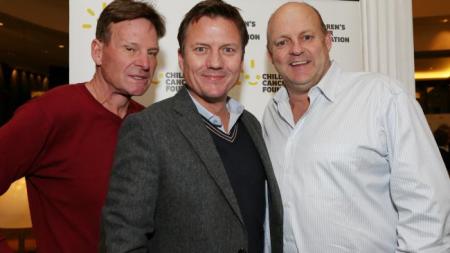 I’d be lying if I said that having a woman on that panel wasn’t a big deal though. When I was growing up, I LOVED my footy, but there just weren’t any females in commentating or presenting roles and even as a kid, I noticed that. I’m so happy that my kids are seeing more and more women talking about sport in the media, because the fact of the matter is, many women enjoy sport just as much as men.

Footy rules the roost in my house and while my interest has waned big time over the years, my husband is annoyingly fanatical and he’s trying his damnedest to turn our daughter and son into mini-fanatics.  I adore the idea that my kids are developing a real interest in sport and love the visibility of women like Sam Lane, Caroline Wilson, Mel McLaughlin and now, Rebecca Maddern, in the sporting world.  The fact of the matter is, it doesn’t take a penis to understand a game of football or to bring interesting insights and discussion to a panel and the presence of a female on The Footy Show will prove just that

Big congratulations to Rebecca Maddern on your new role and well done to The Footy Show for having the sense and the smarts to include another clever panellist on your show. Bravo!

The fab Sam Lane spoke to Monts On the Couch about being a female sports journalist:

Basketball star Liz Cambage speaks to Monty about why men get paid more than women in sport: