For anyone who has a toddler, THIS is for you.

I have come to believe that all three year olds are narcissists and I mean that in the nicest possible way (ok, I don’t but I don’t want you to think I’m an evil witch who hates my child)! Here’s why…

“That’s mine” has become the catch cry of my three year old. I hear it, maybe 100 thousand times a day, if not more. “That’s my phone” um no its not, it’s actually mummy’s phone….”That’s my coffee!” No, you don’t drink coffee darling…”Everything in this room is miiinnnnnnnnnnneeeeeeeee!” Ah, yeah, you get my point.

My three year old goes through more wardrobe changes than Lady Gaga, in a day. Every hour a new pair of shorts or top is plucked from the cupboard as my pre-schooler works his way through everything he owns. His explanation “I wear these now mum.” He’s not asking, he’s telling. I can’t argue with that.

Similar to “that’s mine” is “I do it”…about everything from brushing his teeth to cooking dinner. It’s not just about independence which I of course fully encourage, it’s about the fact he thinks he can actually do it better than anyone else, including cracking eggs. Fun times.

He says he’s sorry….but really is he? No, the answer is no. “Sorry mum” is screamed around the same time I hear my youngest son crashing to the floor. 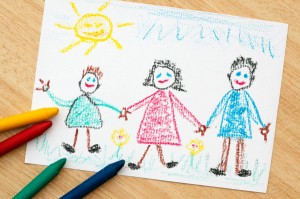 He has ridiculously high standards for someone who has been on this earth for three short years. Suddenly the way I make a vegemite sandwich has come into question. My ability to draw a cow, now also falls short, yet I’m somehow meant to know that the big round circle with scribble around it, is a cupcake. Silly mummy.

He changes his mind, like he changes his clothes. “I want pasta for dinner!” Sure darling I respond, mustering up every last ounce of patience following a long day, until I deliver said pasta and it’s met with what can only be described as a look of disgust and “I’m not eating that, I want a sausage….a Bunnings sausage!” Arghhhhhhhhhhh

Sharing does not exist. With anyone. Unless he’s trying to offload some unwanted pasta.

He can turn on the charm like a total pro. “Peeasssssse mum” oh the manners….what’s that you want a chocolate….um no. Then the true colours come out….“That’s my chocolate!”

He rolled his eyes at me the other day. No joke. Enough said.

Ok, so maybe narcissism is too harsh a description for my full of life pre-schooler…but ego-centric might hit the nail on the head.

The beauty of it is for all of these ‘challenging’ (see what I did there?) traits, are beautiful ones too. Like his ability to say “I love you” right when you need to hear it. His hilarious sense of humour which has me in stitches throughout the day. The way he cups my face in his hands and kisses me on the lips, which I’m sure has an approaching end date.

It’s a tough age, I won’t deny it. But there are flickers of the good breaking through….

What’s been your most difficult threenager moment to date?

This piece was originally posted on www.themumsgroup.com.au