I wish I’d heard what these genius parents did before I boarded a flight with my toddler.

I have just come back from a flight with my 16 month old. I am not exaggerating when I say it was a complete nightmare. There were tears, mine, my daughter’s and almost some from my husband too.

My husband and I have been going to Bali every year for a long time now, we took our little girl Edie with us the same time last year when she was only 6 months old. As she wasn’t even crawling then, it was relatively pain-free. This time round, Edie is now walking, or shall I say bolting everywhere, and she won’t sit still for anyone. She will kiss you, she will high-five you, she will fist-bump you, but she will not sit still. I knew her ‘spirited’ personality would be a challenge on a six hour flight and I was somewhat prepared for it to be hard. But this was next level! 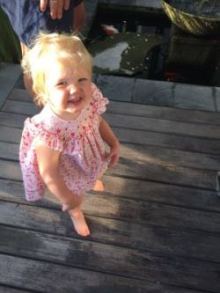 My little angel would not sit in her seat for longer than 2 seconds at a time, and sleep? Not in your wildest dreams. In fact, my husband walked 9.2km with her on a SIX HOUR flight. His fit bit told him so. It was non-stop. When the seatbelt light was on and she had to be contained, man, did the whole plane know about it. We were ‘those’ parents.

I even had my own meltdown and shed a few tears half-way through the flight. My poor husband was wiping both our tears (he deserves a medal). I pity the poor twenty-something man sitting next to us. Actually, I pity the whole damn plane. While we received countless pats on the back, encouraging words, and supportive glances from people near us (namely parents), I’m sure those people were thinking thank God that’s not us or will someone control that kid.

I spent so much of the flight apologising for Edie, but really, she’s just a toddler, it’s all new to her and she doesn’t understand why she can’t run around and why we aren’t putting her to bed for her nap when she’s clearly exhausted. 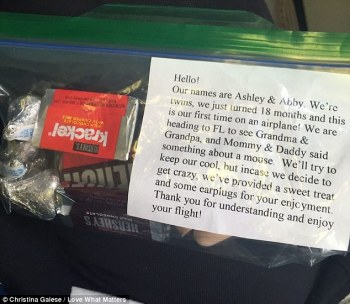 When I stumbled across a story about what parents from New Jersey did before boarding a flight to Florida I was in all kinds of awe. Mum of 18 month old twins Christina Galese, was well aware that anyone on their flight would have to put up with their busy and noisy twin toddlers and didn’t want to be ‘those’ parents on the flight so they made goody bags for everyone sitting around them! The bags contained ear plugs, lollies and a little note from the twin girls, this is what it said;

“Hello! Our names are Abby and Ashley. We’re twins, we just turned 18 months, and this is our first time on an airplane. We are heading to Florida to see Grandma and Grandpa. We’ll try to keep our cool, but in case we decide to get crazy, we’ve provided a sweet treat and some earplugs for your enjoyment. Thank you for understanding and enjoy your flight.”

I could not love this anymore! What a genius idea. I am absolutely going to steal this  for my next flight with my little one…maybe in 2040, if I’ve recovered by then.