Police charge parent of six-year-old for letting her walk from school alone.

When is the right time to let your kids walk to school by themselves? Six? Eight? Twelve? Never?  The answers are as varied as our parenting styles themselves, however, the law has stepped in and made itself well and truly clear in the Queensland town of Miles, 340 kilometres west of Brisbane.

Sergeant Benjamin Wiltshire has charged one parent and warned others in Miles via the school newsletter that they too face charges (with a possible penalty of up to three years in prison) if they allow their kids to walk the streets alone. According to Queensland law, children under 12 are not to be left unattended for an “unreasonable” amount of time, dependant on individual circumstances. 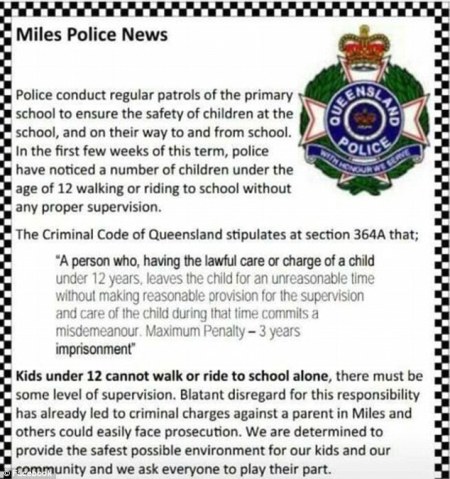 According to a spokesperson for Queensland Police, the Miles case involved a six-year-old girl who was found alone and using a hand-written map in an attempt to make her way to a location that was a substantial distance away. The little girl’s mother, a 33-year-old woman, is said to have let her children “wander around town unsupervised” in a “feral” manner.

I have a six-year-old and there is zero chance I’d let him walk to school on his own – and same goes for his eight-year-old sister.  To be totally honest, I don’t think I’d let my kids walk the 20 minutes home alone at all while they’re in primary school. For me, they’re just too young, too vulnerable and too easily distracted to do so. To some, that probably sounds crazy and that’s okay – we’re all (hopefully) making the decisions we feel are best for our kids. For some parents, that decision involves allowing their children the independence to walk their neighbourhood alone and that’s okay too.

While I certainly believe that criminally charging parents for allowing their ‘under 12’s’ to make their own way to school has definitely hit the “way too far” end of the spectrum, I don’t actually think that’s what this particular law is about. By Sergeant Wiltshire’s own admission, there’s a massive difference between a group of 11-year-olds walking home together and a little six-year-old girl trying to find her way to a far-away location via a hand-written map. This wasn’t just a child making her way home from school on familiar territory. These are two very different situations.

Protecting our communities is the job of the police. While I don’t think charging the parents of a ten year old who is walking the couple of blocks home from school is very rational, I will say that I feel great comfort in knowing that the police were able to provide that little girl with some assistance to get to her location safely in what was possibly a scary and potentially dangerous situation for such a young child.

How old were your children when you let them walk to school on their own? Have the police gone too far in this situation?